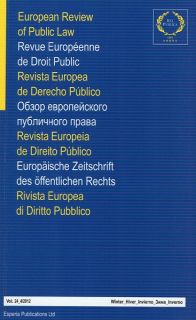 In this ERPL issue, the reader will find six articles on very topical public law issues. The first article examines the current situation of Italian constitutional justice in terms of procedure, outcomes, and context. The second article, which is the first article published in the ERPL in Portuguese, aims to demonstrate that it is feasible to find a common legal-constitutional system of Portuguese-speaking countries, uniting them to different extents to a so-called "Constitutionalism of Portuguese-speaking countries". The third article published in this issue considers the role that UK courts play when interpreting statute law in the light of domestic constitutional norms while another article analyses the main characteristics of the Greek immigration crisis and the policies adopted to resolve it since its emergence in the early 90's, in the perspective of the relevant EU framework. Another article discusses what the obligation to disapply provisions of national law which are incompatible with EU law exactly means, and how it goes together with the obligations and tasks of administrative authorities under their national law, in particular the principle of legality, focusing on France, Germany and the Netherlands. Finally, the sixth article published in this ERPL issue examines how the application of EU law can be conciliated with the respect of the Constitution of each Member State and analyses the approach of the French Constitutional Council, which responds to this question in three steps.

Another chronicle deals with the issuance in Greece, in the context of the ongoing fiscal crisis, of acts of legislative content and indicates that more than six times as many acts of legislative content were issued in the last four years than were issued in total since the reisntatement of democracy in Greece and the adoption of the 1975 Constitution! The chronicle concludes that the justification of the emergency for which such an act may be issued, falls outside the scope of jurdicial review, according to the fixed jurisprudence of the Council of State.

The analysis of the right to legal initiative granted to the people of Latvia which in 2011 was exercised twice and the issues of the legal status of a Constitutional Court Justice are the main constitutional law issues examined in another chronicle coming from the Republic of Latvia.

The developments in Polish Constitutional Law during 2011 are at the centre stage of the next chronicle. The adoption of an Electoral Code, codifying for the first time this branch of law in Poland, of a new statute on the National Council of the Judiciary and other developments in the field are presented in the chronicle.

Continuing in this section of chronicles, the ERPL readers will find a chronicle focusing on the wrestling with political extremism in Serbia, as demonstrated by the inconsistent case law of the Serbian Constitutional Court in the field of closure of associations. This chronicle investigates this case law and the concepts over which the Court stumbled, namely, whether an unregistered association can be banned, what a secret association is, and what the legal nature of the banning procedure is.

The last chronicle on Constitutional Law found in this ERPL issue comes from Spain and reviews the most significant legal events occurred in 2011: the second amendment of the Spanish Constitution of 1978 with the introduction of the principle of budgetary stability of Public Administrations, the holding of parliamentary elections with the victory of the People's Party, the holding of municipal elections and of autonomous elections, which also resulted to the victory of the People's Party. Some important acts on the economic and labour fields are also examined. It finally examines a landmark judgement of the Spanish Constitutional Court (Judgement No. 30/2011, of March 16), where the distribution of competencies has been established in matters concerning hydraulic power stations when the water flows through more than one Autonomous Communities.

Another chronicle presents New Administrative Judicial Procedure and Local Government Acts that have been drafted in Finland, focusing on the question: what is required of municipalities if they are to be able to effectively and fairly provide the general welfare services for their residents throughout the country? Also the institution of the Finnish Parliamentary Ombudsman is examined while in the field of case law, the boundary between private and public law has been the subject of discussion in many different respects.

The chronicle on Polish Administrative Law examines the developments occurred both in the field of legislation and in this of case law. The Law of January 20, 2011 on the liability of civil servants for material damages resulting from a clear violation of the Law, the Supreme Administrative Court's decision on the unconstitutionality of the revolutionary amendment of the Construction Law and other developments are presented in the chronicle.

The author of the chronicle on Serbian Administrative Law focuses on the role and the functioning of the independent agencies in Serbia which were set up in accordance with the Public Agencies' Act in 2005 and the relevant discussion both within the Government and the media, since independent agencies have become a quite controversial issue in Serbia.

The chronicle on Spanish Administrative Law centres on the organic and ordinary laws and an important number of Royal Decree-Laws that the Spanish legislature considers necessary in order to emerge from the economic crisis facing Spain for some time, focusing on three of them: the Organic Law 2/2012, of April 27, on Budget Stability and Financial Stability, the Royal Decree-Law 12/2012, of March 30, whereby are introduced various tax and administrative measures directed at the reduction of the public deficit and Law 11/2012, of December 19, on urgent measures concerning the environment.

As always, book reviews and information on major academic works and studies on public law are published in this ERPL issue.

All in all, this is an issue of the ERPL where, as is the standard pursued by the Review, developments on public law of various countries are presented and commented in detail.

G. Anthony,  Statutory Interpretation and the Judicial Role in the United Kingdom [IN ENGLISH]

Ch. M. Akrivopoulou, Α Critical Outlook in the European Union: The Issue of Immigration in Greece [IN ENGLISH]

M.J.M. Verhoeven, The ‘Costanzo Obligation’ of National Administrative Authorities and the Principle of Legality of the Administration [IN ENGLISH]

Th. Papadimitriou, The Regulation of Relationships between the French Constitutional Order and the Legal Order of the European Union by the Constitutional Council [IN FRENCH]

A. Rodiņa, Republic of Latvia / République de Lettonie [IN ENGLISH]

A. Čavoški, Serbia / Serbie [IN ENGLISH]

Statutory Interpretation and the Judicial Role in the United Kingdom

Α Critical Outlook in the European Union: The Issue of Immigration in Greece