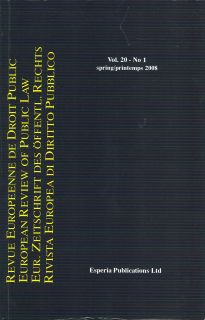 Orders in Council as a Way to Bridge the International and European Legal Orders on Security Issues: United Kingdom

Orders in Council
as a Way to Bridge the International
and European Legal Orders on Security Issues:
United Kingdom

Clearly, the response to Al-Qaida and the threat that terrorism poses to interna­tional peace and security raise major legal issues. This report examines how the international and European legal orders have interfaced with British municipal law on security issues by looking at the role played by Orders in Council. Although Orders in Council can be creatures of either the royal prerogative or a form of sec­ondary legislation, this report only focuses on them as a form of secondary legisla­tion. As to the international legal order, it looks at how they have responded to Se­curity Council Resolutions dealing with terrorist financing, and it also assesses how they have been used to deal with the Passenger Name Records issue in light of recent European Court of Justice jurisprudence. By examining the ways in which Orders in Council have been used, and continue to be used, on security issues, this report reveals the unique ways in which British constitutional arrangements dy­namically reflect and adapt to international legal commitments and foreign policy prerogatives.