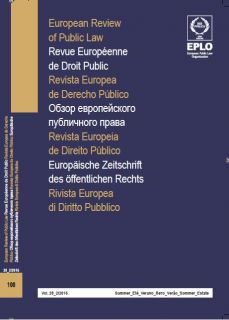 The ERPL is celebrating its 100th issue and is proud to publish therein an article by H.E. the President of the Hellenic Republic Prof. P. Pavlopoulos titled "La loi entre science naturelle et science juridique". This article is based on the speech the H.E. the President of the Hellenic Republic presented on the occasion of the attribution to Him of the title Doctor honoris causa by the Russian Presidential Academy of National Economy and Public Administration (RANEPA) in Moscow on January 15, 2016.

Several articles follow in this ERPL issue. The first article aims at showing that the identification of democracy with political representation, which in turn implies periodic elections of representatives, is not realistic and maintains that, in order to preserve democratic characteristics, representation shoud be enriched, inter alia, by the partial substitution of election by random selection. The next article focuses on the German Electoral Law, which is therein characterised as complex, but just, if one wants primarily to find a compromise between proportional representation and majority vote. It emphasizes the fact that politicians and constitutional scholars and lawyers are concerned about the role of the Federal Constitutional Court in election legislation and it also informs the reader about the increasing demand for a more transparent electoral system and an improved balance of separation of powers in favor of the legislature. The objective of the next paper is to address two relatively distinct questions: Is Union law authorized to intervene in the organization of the Member States' constitutional justice and to what extent? and Which one-off interventions of Union law does one already find in the organization of constitutional justice, and what is their intended purpose? In the following article, the approach of public procedures for the award of public service concession aims at highlighting the position of the national judge in the current European structure as he is the one to intervene for the good of "internal" legality, unless the reference is to the aspect of 'time', in the meaning of the time of entry into force of European or national provisions. The author of the next article aims to summarize the course of landscape protection in Italy and envisage some solutions that could strengthen this protection, such as enhancement of the State's role, simplification of the process of authorization and establishment of an intimate bond between the landscape and the urban planning. The last article in this issue begins with the structure of the Portuguese public administration and its organs, considering the central, regional and local administration with the respective institutions and regulatory authorities. The protection of citizens' rights and legally relevant interests as well as the duty of the administration to observe the principles of equality, proportionality, impartiality and good faith are explicitily provided by the Constitution and the ordinary law. The article also gives an insight into the competencies of the Supreme Administrative Court and into the state liability law of 2007.

The second chronicle fully describes the law-making process of the Parliament of Georgia. It deals with each step of this process starting from the legislative initiative and ending with the promulgation of draft laws and it describes the rights and obligations of the parties involved in this constitutional process.

The chronicle on Italian Constitutional Law presents the main developments in the field during 2015: the Parliament elected the new President of the Republic who is the constitutional judge Sergio Mattarella, former MP and minister; the government managed to promote comprehensive reforms in the fields of public administration, labor and education; the Parliament finally adopted the reform of the electoral law (so-called Italicum) and concluded the first step on constitutional reform; M5S and Lega Nord have grown in electoral consensus.

The Constitutional Law chronicle coming from the Netherlands examines the Urgenda case, which is one of the most constitutionally controversial cases of the past years in Dutch law as the District Court, in fact, obliged the government to adjust its climate policy. Reference is also made to the advisory referendum to be held in 2016 regarding the Ukraine-EU Association Agreement, whereby an important geopolitical decision is placed in the hands of the Dutch electorate. Other developments in as far as national politics is concerned, such as the March 2015 Senate elections, the resignation of the Minister and the State Secretary of Security and Justice, a series of amendments to the Dutch Constitution still under discussion and the large-scale decentralization operation, are presented.

Next, in the section of Administrative Law, the first chronicle characterizes the year 2015 as a year of a great deal of agitation in France. The judicial activity can feel the terror standing against the Republic. Here the administrative judge is the arbiter. But this year has also a calmer side: this of an administrative jurisprudence that the culture of the precedent and of the reasoning based on argumentation render more predictable and reassuring. From all points of view, the judge will have served as a counterpoint to the events.

The second chronicle in this section describes the administrative reforms in Italy in 2015: the reform of Public Administration (so-called Madia's Law) and the main changes that followed; the measures introduced by the new Anti-corruption Law; the reform of the educational system (so-called "Buona Scuola" reform); and the main measures contained in the Stability Law for 2016 are analyzed.

The last chronicle in this section is devoted to actual amendments of the administrative law occurred in Russia in the field of state antimonopoly control and in public procurement in 2015 and focuses on the amendments to the Federal Law on protection of competition and the Russian Code of administrative offenses while describing the main innovations and changes in regulatory legal acts governing the contract system in procurement.

This ERPL issue continues with the review of an interesting selection of books coming from France, Italy and the United Kingdom whereas the presentation of fourteen books received by the EPLO Library concludes the issue.