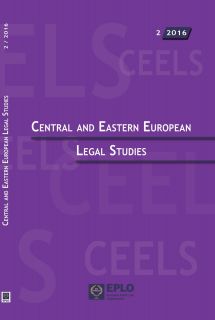 In the second issue of the year 2016 of the Central and Eastern European Legal Studies, eight articles coming from Albania, Greece, Lithuania, and the Slovak Republic deal with topical public law issues.

The first article investigates man's inborn tendency to respect legal norms, which results from the fact that he is a collective being and any collective requires rules to enable it to exist. The article maintains that this tendency must have been an inborn instinct that had arisen by biological evolution. The following article focuses on the status of national minorities and ethnic groups in public administration in the Slovak Republic; it presents the applicable key terms, the most important legal instruments and the relevant pieces of legislation. The third article presents the author's view on the legislative approach to prostitution in the Slovak Republic and the various practical and application problems related to the sanctioning of prostitution and activities related thereto. In the fourth article the author addresses the question of outsourcing torture to other countries and the use of enhanced interrogation techniques on detained suspects. The paper focuses on Poland and the landmark cases involving the use of torture at Polish detention facilities in the War on Terror. The following article maintains that large financial companies in different countries have different approaches to respecting the legal framework and impementation of the provisions and regulations for fundamental rights. Governments that are in difficult economic positions tend to stimulate the activity of these corporations in their respective countries. Under these conditions, on the one side it is of great interest to lobby on the respect of fundamental rights and abusive corporate favoritism on the other side. Next, comes an article which deals with the issue of the criminal liability of legal entities in the Slovak Republic. In the first part, the historical development of this institute and its specific reflections in the present legislation are presented whereas in the second part of the article, the focus is on the legislation on the criminal liability of legal entities in the Slovak Republic based on the adopted act no. 91/2016 Co. The following article deals with the analysis of Law IX-2112/2004 on tax administration in Lithuania. The significant place that this Law occupies among special tax law sources in Lithuania is examined and explained. In the final article of this issue, the protection that the whistleblowers working in the EU institutions enjoy is examined. More specifically, the article gives a critical analysis of the articles of the Staff Regulations of Officials of the European Union and a reference is made in specific cases which had been the subject of a judicial investigation.

J. Hašanová, Status of National Minorities in the Slovak Republic [IN SLOVAK]

L. Szabanová, Legal Aspects of Prostitution in the Slovak Republic [IN ENGLISH]

L. Garayová, Outsourcing Torture - Poland and Its Role in the War on Terror [IN ENGLISH]

A. Kraja, Companies and Their Approach towards Fundamental Human Rights [IN ALBANIAN]

V. Valla, Criminal Liability of Legal Entities in the Slovak Republic [IN SLOVAK]

B. Sudavičius, Codification of Tax Law in Lithuania: Law on Tax Administration [IN LITHUANIAN]

M. Στυλιανιδου, Protection of Whistleblowers in the EU Institutions [IN GREEK]

Status of National Minorities in the Slovak Republic

Legal Aspects of Prostitution in the Slovak Republic

Outsourcing Torture - Poland and Its Role in the War on Terror

Companies and Their Approach towards Fundamental Human Rights

Criminal Liability of Legal Entities in the Slovak Republic

Codification of Tax Law in Lithuania: Law on Tax Administration

Protection of Whistleblowers in the EU Institutions