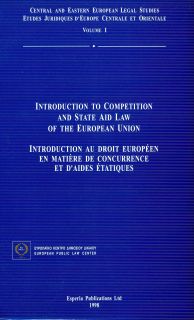 Volume I appeared under the bilingual title “Introduction to Competition and State Aid Law of the European Union / Introduction au droit européen en matière de concurrence et d’aides étatiques”. In this edition were published articles written in English or French by nineteen academics coming from Bulgaria, the Czech Republic, Poland, Romania and the Slovak Republic, all having participated in a training seminar entitled Training of Academics from CEEC in Competition Law and State Aid Policy, organised by the ECPL within the EC’s Phare programmes.

The articles presented in this edition are the direct result of a Phare pro­gramme entitled Training of Academics from CEEC in Competition Law and State Aid Policy whose aim was to increase the awareness of compe­tition policy with a wider public of economic operators. The rationale be­hind this particular Phare programme was the idea that academics from Central and Eastern European countries could be one of the catalysts for improving this awareness. The articles included herein are the works of nineteen Central and Eastern European academics who took part in an intensive training seminar devised and executed by the European Public Law Cen­ter (now European Public Law Organization), on EC competition policy and state aid, and are the result of compara­tive studies on the common competition rules and how they are reconciled with the laws on competition as perceived in Bulgaria, the Czech Repub­lic, Poland, Romania, and Slovakia.