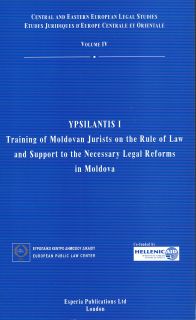 YPSILANTIS I: Training of Moldovan Jurists on the Rule of Law and Support to the Necessary Legal Reforms in Moldova

Volume IV, “YPSILANTIS I, Training of Moldovan Jurists on the Rule of Law and Support to the Necessary Legal Reforms in Moldova”

Volume IV under the title “YPSILANTIS I, Training of Moldovan Jurists on the Rule of Law and Support to the Necessary Legal Reforms in Moldova’’ includes the academic results of the YPSILANTIS I project, an institution building project whose overall objective was to train Moldovan jurists on the concept of the “Rule of Law”.

The academic results of the project “Ypsilantis I” are gathered in the present volume of the Central and Eastern European Legal Studies. The “Ypsilantis I” project was an institution building project of the European Public Law Center (EPLC) - now European Public Law Organization, co-funded by the Department of International Development Cooperation (Hellenic Aid) of the Hellenic Ministry of Foreign Affairs, which started in January 2004 and ended in October 2006.

The overall objective of the project was to train Moldovan jurists on the concept of the “Rule of Law” and to support the necessary legal reforms towards the establishment of a true State of Law in Moldova mainly by way of four seminars for judges, prosecutors, notaries, jurists, lawyers, professors and students, which took place in the capital of Chisinau, between April and December 2005, and of a study visit in Greece.

SUMMARY
FOREWORD
WORKSHOP
PRESENTATIONS
A. ANTHIMOS, Judicial Cooperation in Civil Matters
F. DE STRADIS, General Introduction on the European Union Enlargement
E. LÁŠTIC, Executive and Legislative Relations during the Slovak Accession into the EU with a Focus on the Separation of Powers
L. MATEI, The Romanian Public Administration facing the Challenges of Integration into the European Union
M. RYBÁŘ, EU Political Conditionality and the Accession of Slovakia
ABSTRACTS
TURKEY

THE ROLE OF THE JUDICIARY
WITHIN A EUROPEAN INTEGRATED CONTEXT
PRESENTATIONS
V. T. ALISTAR, The Fight Against Corruption in Romania
M. COCOSATU, The Role of the Constitutional Court of Romania during the Stage of Integration into the European Union
A. MATEI, Corruption, Transparency and Quality. Comparative Approaches and Judiciary Support
L. MATEI, Management of Civil Service Professionalisation in the Knowledge-based Society. Legal and Institutional Framework
A. ÖZTEZEL, Reforms and Judicial Cooperation on Fundamental Rights in Turkey in the Scope of European Union Criteria
I. STOILOV, Police and Judicial Co-operation Between Bulgaria and Europol and Eurojust
G. TONEVA-DACHEVA, Judicial Cooperation in Criminal Matters
S. TSATSAROV, The Development of a Judge as a Profession: Appointment, Training, Promotion, Career According to the European Standards
P. ZACHAROF, Legislation Harmonisation in the Acceding Countries of the EU