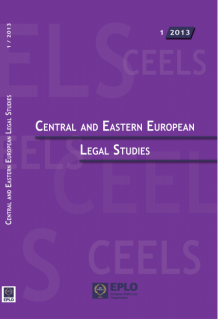 A structural change has been carried out with regard to this publication, which up to now had been a special edition of the European Review of Public Law.

With a view to reshaping this effort and to advancing even further its image and scientific input after the lapse of almost 15 years since the Central and Eastern European Legal Studies (CEELS) was launched, the Series has been reshaped first through the establishment of its own Board of Editors, composed by renown academics from countries of the Central and Eastern Europe as well as from Western European countries, all of them specialised in this area. The CEELS Board of Editors' composition can be found on the EPLO Publications website. The aim is to give the opportunity to academics coming from CEE countries and also to academics from other countries specialising in this field, to come together and exchange views on public law issues of these countries.

In the first issue of this periodical publication, Central and Eastern European Legal Studies, 1/2013, the readers can find papers analysing several aspects of public law in CEE countries such as the Czech Republic, Latvia, Lithuania, Poland, Slovakia, Ukraine. The first article is devoted to the study of the evolution of membership criteria in the Council of Europe since the creation of the Organisation until today. The next article deals with the idea of regulating or limiting the outburst of violent conflict with the enemy by trying to answer the question of why not to use all available means against the opponent in wartime. Another article is dealing with the initiation of a case in the Constitutional Court in the Republic of Latvia, analysing the practice followed by the Court. The next article describes the contemporary criminal policy of Ukraine which is significantly influenced by global trends towards the humanisation of criminal liability and the protection of rights in the sphere of criminal law application. The reader can next find a paper dealing with the apprehension of persons in three young Member States - the Slovak Republic, the Czech Republic and Poland, as well as a paper on the legislation of public security in Ukraine, analysing the current legislation and judicial literature and making proposals to this end. Another article examines the development of the supervision of the financial market in the Republic of Lithuania in its constitutional context whereas the following article deals with the corporate income tax base and rules of income and expenses, based on the systemic review of the Republic of Lithuania Law on corporate income tax, Business accounting standards and Tax dispute settlement institutions case law. The last article published in this first issue of the CEELS gives an overview of the basic legal regulation of the three types of environmental reponsibility in Lithuania (administrative responsibility, criminal responsibility and civil liability) and describes the major problems in this field.

Membership in the Council of Europe: Evolution of Criteria

The Concept of Legal Regulation of Warfare

The Criminal Policy of Ukraine at the Peak of Doctrinal Reconsideration

The Apprehension of Persons in Central Europe

Legislation on Public Security in Ukraine

Corporate Income Tax Base: Rules of Income and Expenses in the Republic of Lithuania and their Relationship with Financial Accounting

Responsibility for Environmental Violations in the Republic of Lithuania