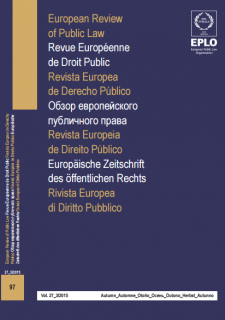 This ERPL issue starts with an article showing the importance of a measure of state intervention in the market arena to induce sustainable development, amidst the recent economic-financial and environmental crises. The conditions are presented for a regulation compatible with the Constitution, especially to correct market and government failures. The next article views 'security in the balance' in the context of state surveillance measures post-9/11 and conceptualizes it in the 'war on terror' model as opposed to the 'law enforcement' model. As many states seem to have valued security higher than others, the focus is placed on courts, rather than parliaments, as forums of such choices, especially the European Court of Human Rights and the US Supreme Court. This article concludes that European judges, compared to their American counterparts, have proved to be less deferential to the goverment prerogatives in security matters. In the next article, it is claimed that the Stability and Growth Pact (SGP) sets rigid budgetary frameworks to EU Member States, within which the latter must ensure local authorities adequate financing for their statutory responsibilities as required by the financing principle. It is stated that the financing principle can be interpreted as meaning that the public sector cannot take on more tasks than it can afford, which means that the SGP and the financing principle are not in conflict with each other but rather complement each other. The fourth article on the European Single Supervisory Mechanism focuses on the European Central Bank (ECB), which has been entrusted with prudential supervision of the most important credit institutions of the Eurozone, a process that raises controversial issues. It is concluded that close cooperation between European and national authorities will be essential to ensure the smooth functioning of a very complex supervision system and that the provision of an internal administrative review of the ECB supervisory decisions may play a significant role in protecting stakeholders.

In the section of chronicles on Constitutional Law, the first one deals with the Slovak experience in the semi-presidential system as introduced by the 1999 Amendment to the Constitution. The first part explains the origins of semi-presidentialism in Slovakia and examines the constitutional powers of the President, while the second part analyzes two recent cases of the use of the power of appointment by President I. Gašparovič.

The second chronicle maintains that the "Revolution of dignity" was the starting point of a new stage of constitutional changes in Ukraine, including the adoption of legislation by the "revolutionary wave". The constitutional process was aimed at legal regulation of the new political reality that followed the revolutionary events. The main provisions of this legislation are examined along with developments resulting from the presidential, parliamentary and local elections held in Ukraine in 2014, such as the launching of the procedure for the revision of the Constitution of Ukraine concerning the decentralization of power.

Next, in the section of Administrative Law, the first chronicle focuses on the developments in the grounds of judicial review in Ireland in the period 2013 to 2015, namely the law of financial bias, the right of an individual to correct defective fact-finding, the operation of the English Carltona rule in Irish law and the right of campaign groups to engage in judicial review.

In the final chronicle of the section, the dynamics of legislative reforms of the administrative proceedings in Ukraine in 2014-2015 are dealt with. This chronicle describes the impact of the reform of justice in the proceedings of the judicial review institutions and the resolution of public law disputes.

The first chronicle in the Jurisprudence section intends to provide an accurate account of the 2013-2014 case law of the Belgian Constitutional Court. The authors recall the structure, the organization and the specificities of constitutional litigation in the country and they devote important developments to the judicial techniques used by the Court in its decisions. In this framework, the authors carefully examine fundamental rights litigation and competences litigation.

The second chronicle focuses on a variety of subject matters offered by the cases dealt with by the Court of Justice of the European Union in 2014. The economic and social life remains in the center of the questions raised, but the questions arising from issues touching most sensitive parts of the human condition appearing in the Union law lead to new innovative solutions.

The third and final chronicle of this section focuses on the decisions issued by the Portuguese Constitutional Court in 2014, noticing that most of them refer to concrete, rather than abstract, constitutional control, although the latter registered an increase in comparison to preceding years. The most significant decisions regarded public servants and pensioners. Decisions on tax law, penal issues, civil liberties, family law and regional autonomy were selected considering both the subject in itself and its relevance for the international reader.

This ERPL issue continues with its Book Reviews section, with an interesting selection of three books from Austria, Slovakia and Ukraine. Finally, ten books received by the EPLO Library are presented in this last section of the issue.

ARTICLES
J. FREITAS, Administrative Law and Regulatory Challenges: Market and Government Failures [IN PORTUGUESE]
A. TSIFTSOGLOU, Security in the Balance: Reviewing Surveillance Measures in the 'War on Terror' [IN ENGLISH]
T. MATIKAINEN, General Principles on the Application of the Stability and Growth Pact and the Principle of Adequate Financial Resources - To Coexist or To Conflict? [IN ENGLISH]
J.C. LAGUNA DE PAZ, The European Single Supervisory Mechanism [IN ENGLISH]

Security in the Balance: Reviewing Surveillance Measures in the 'War on Terror'

General Principles on the Application of the Stability and Growth Pact and the Principle of Adequate Financial Resources - to Coexist or to...