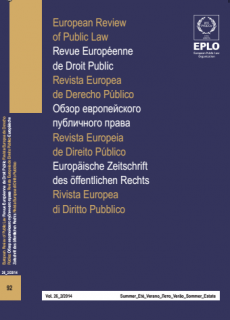 In this ERPL issue, the reader will find several articles on very topical public law issues. The first article considers the relationship between constitutionalism and the growth of arrangements whereby the private sector increasingly takes over or participates in important, social-welfare functions previously exercised by politically accountable institutions. The second article analyses how tax measures of indirectly regulating the financial industry differ, what challenges they pose and what their overall contribution would be in making the financial system more stable and resilient and concludes that the feasibility of an FTT is legally sound. The third article published in this issue examines whether the current model of public law, based on the dogma of territoriality, does not accentuate the creation of spaces of impunity and the loss of the binding force of the national administrative law. Another article discusses the challenges and application of the Regulatory Impact Analysis whereas the next article published in this ERPL issue examines the Greek legislation on the illegal pillaging of monuments. Another article analyses the character and essence of the general principles of the administrative procedure provided for in the Polish code of administrative procedure by aso referring to provisions of the European Code of Good Administrative Behaviour. Finally, the last article in this ERPL issue gives an overview of the activity of the Portuguese Constitutional Court in 2012.

The chronicle on Italian Constitutional Law presents how the Government led by Mario Monti, formed at the end of 2011, focused attention on policies of fiscal austerity and public spending review, in line with the decisions taken at the European level whereas in the second half of the year Government action has been characterised by a greater attention to issues of growth and support to the system of Italian companies.

The call for new elections for the Second Chamber (the directly elected Chamber of Dutch Parliament) is examined as the main constitutional issue in 2012 in the Netherlands. Moreover, two court cases very important with regard to human rights are examined in the chronicle coming from the Netherlands.

The last chronicle of Constitutional Law in this ERPL issue presents the two main tendencies in Russian Constitutional Law and Jurisprudence in 2012: The first tendency appeared as concessions to the political opposition and a result of the 2011 manifestations leading to a minor political reform, namely return to the direct election of the governors with a newly established 'municipal filter' of collecting signatures from municipal officials and liberalisation of registration of political parties. The second tendency was about taking measures of conservation and protection of the political system.

Continuing in the section of Administrative Law chronicles, a chronicle presents developments in France such as, among many, the judge's understanding of the procedural error and of assault, the implementation of the principle of separation of administrative and judicial authorities with regard to preliminary questions, the progress of safeguards for prisoners, the balance between the general police and the special police of GMOs, the role of the public rapporteur in the administrative proceedings.

Another chronicle comes from Russia and is devoted to actual amendments occurred in 2012 in the field of state antimonopoly control and in the housing sphere.

In this ERPL issue, the chronicle on the Jurisprudence of the European Court of Human Rights is providing an overview of the 32 cases, among the 1,093 cases delivered by the Court in 2012, which were demmed to bear the highest level of importance and were selected for publication in the 'Reports of Judgments and Decisions 2012'.

A chronicle on the Jurisprudence of the Court of Justice of the EU, and more in particular on Eurosystem, Financial and Banking Law, is launched in this issue of the Review, analysing the Feyerbacher judgment. In this judgment, the Court of Justice of the European Union has interpreted for the first time the Headquarters Agreement between the ECB and the Federal Republic of Germany in the framework of a reference for a preliminary ruling.

The last chronicle, on French Constitutional Jurisprudence, analyses the success in the French constitutional litigation of the Priority Question of Constitutionality confirmed in 2011. People have been able to grasp this new way of legal remedy to ensure the supremacy of the Constitution in the internal legal order, and therefore, the Constitutional Council had to make some procedural changes.

As always, book reviews and information on major academic works and studies on public law are published in this ERPL issue.

All in all, this is an issue of the ERPL where, as is the standard pursued by the Review, developments on public law of various countries are presented and commented in detail.

D. Feldman, The ‘New Separation of Powers’, Constitutionalism, and the Regulation of Public-Private Cooperation [IN ENGLISH]

D. Pesendorfer, Financial Taxes and the Sand in the Wheels of Financialization: Legal Challenges for the EU Directive Implementing Enhanced Cooperation in the Area of Financial Transaction Tax [IN ENGLISH]

M. Prata Roque, The New Frontiers of Administrative Law - Globalisation and Changes of the Principle of Territoriality in Public Law - [IN FRENCH]

K. Tsimaras, Regulatory Reform or How to Improve Public Administration’s Efficiency [IN ENGLISH]

A. Maniatis,  The Confrontation of Pillaging of Cultural Property [IN FRENCH]

W. Jakimowicz, General Principles of the Administrative Procedure as Polish Guarantors of the Right of Citizens to Good Administration [IN FRENCH]

J. Miranda, The Constitutional Court in 2012 [IN PORTUGUESE]

I. Kalandadze, Georgia / Géorgie [IN ENGLISH]

The ‘New Separation of Powers’, Constitutionalism, and the Regulation of Public-Private Cooperation

Financial Taxes and the Sand in the Wheels of Financialization: Legal Challenges for the EU Directive Implementing Enhanced Cooperation in the Area...

Regulatory Reform or How to Improve Public Administration’s Efficiency

The Confrontation of Pillaging of Cultural Property

The Constitutional Court in 2012