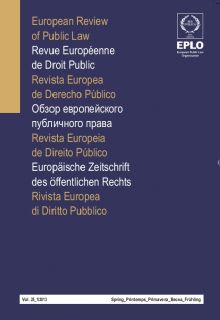 In this issue, are published the proceedings of the annual Conference of the EGPL organised from the 14th to the 16th of September 2012, on the subject "Public Law and the Economic Crisis". Many prominent law scholars from all over Europe and the world participated in this Conference and contributed to the dialogue on the theme.

The Opening Address was given by the President of the Italian Council of State, Dr. G. Coraggio.

Under the heading "General Introduction: Public Law, the Crisis, the Current Crisis", first a paper maintains that the Economic Crisis is a crisis of the rule of law and democracy and that in order to overcome the crisis, we need various measures and a paradigm shift as well as a legal way, since Law is essential to protect freedom and equality. Also, under this heading, another contribution examines the crisis erupted in 2008, which is "different" not only in economic terms but also in legal and institutional ones due to the existing constraints deriving from international and European treaties and from national Constitutions and which influenced deeply the legal reactions to the present crisis. Finally, under the same heading, a contribution is presenting the legal definition of public international financial law, its delimitation vis-à-vis other branches of international law as well as its branches, the historical evolution of public international financial law since 1971 and the levels in its making and enforcement.

Another heading is dealing with the theme of "Public Law and the Current Crisis: Institutional Arrangements and Instruments of Action", under which a paper on the institutional changes deriving from the current crisis is published. The paper notes however that instruments of action have not been profoundly modified.

Under the heading "Public Law and the Current Crisis: From Local Governments to the World", a paper studies the impact of the economic crisis on public institutions and public law focusing on procedures and decision-making bodies. Another paper under the same heading deals with the "variable geometry" of some public law principles in the context of a crisis, from the example of the "competition principle" emerging from the public procurement rules and the question of whether that variable geometry is or is not desirable.

National reports follow this heading, coming from Albania, Bulgaria, Latvia, Poland, Portugal, Romania, Serbia, Slovakia, Spain, Sweden and Turkey. These are based on a questionnaire elaborated on the theme of the Conference included in this ERPL issue.

A Case Study is then providing an overview of the global economic crisis by laying down the causes that brought USA and EU into crisis. Further, legal responses to the crisis are set forth. In this context, both sides of the Atlantic tried to promote economic growth, struggle with and make a way out of the crisis and strengthen economic governance. The Case Study concludes that in this sense a number of critical issues are encountered, that have to be carefully considered in the course of economic intervention of the State.

The Conclusions present the four different legal discourses arising from the economic crisis and maintains that the current crisis is changing both Public Law and Public Law Scholarship and represents an opportunity of intellectual refreshment and cultural innovation based on the interdisciplinarity between law, political science and economics.

G. Napolitano, “This Time is Different” for Public Law Too: Shifts of Sovereignty and Power During and After the “2008-? Crisis” [IN ENGLISH]

C.V. Gortsos, Definition, Historical Evolution and Levels of the Making and Enforcement of Public International Financial Law [IN ENGLISH]

E. Malaret,  The Malaise of Globalisation, the Economic Crisis and the Imbalances in the Structure of Powers of Decision. For an Open European Economic Constitutionalism [IN FRENCH]

M. Kirkby,  Public Contracts at the Epicenter of the Crisis: Pondering the Variable Intensity of the Competition Principle [IN ENGLISH]

M. Leskoviku / D. Leskoviku, Public Law and the Economic Crisis: An Approach under the Human Rights Perspective: Albania [IN ENGLISH]

Information [IN ENGLISH AND IN FRENCH]

“This Time is Different” for Public Law Too: Shifts of Sovereignty and Power During and After the “2008-? Crisis”

Definition, Historical Evolution and Levels of the Making and Enforcement of Public International Financial Law

Public Contracts at the Epicenter of the Crisis: Pondering the Variable Intensity of the Competition Principle

Public Law and the Economic Crisis: An Approach under the Human Rights Perspective: Albania

Public Law and the Economic Crisis: Republic of Latvia

Economic Crisis in Serbia: Hanging Over the Old Cliff

The Presence and Contribution of the (Eastern) Roman Empire in the Formation of Europe / La présence et la contribution de l’Empire romain (d’...

The Constitutional Law of Privatisations in the United Kingdom