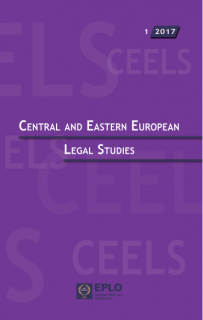 In the first issue of the year 2017 of the Central and Eastern European Legal Studies, are published seven articles dealing with topical law issues in Georgia, Greece, Latvia, Lithuania, Russia and the Slovak Republic.

The first article gives an overview of basic theoretical starting points of the position of the Public Prosecutor’s Office in the Slovak Republic, especially focusing on its activities within the framework of the criminal procedure and on principles on which the Public Prosecutor is bound in this procedure. The following article examines the gross violations of Greek regulatory law basic principles and of Protocol 7 to the ECHR, which are being committed by imposing an administrative fine due to army insubordination, based on the clear provisions of the Joint Ministerial Decision 429.1/17/281810. The third article examines the legal aspects of tax secrecy in the Slovak Republic, maintaining that a positive and a negative definition of tax secrecy may be inferred and concluding that the restriction of such right is exclusively possible on the basis of the law. In the fourth article the author deals with the question of higher tax rates in the Republic of Lithuania and states that they express the response of the law-maker to actions injurious for society or illegal. The following article maintains that the evaluation of Latvian business environment clarifies that the quality of the legislation is one of the topical problems which need to be solved. The respect of the principle of good legislation, the rules laid down for the legislator by the normative acts and the case law of the Constitutional Court, the abstract review applications submitted by Saeima deputies and the role of the State President with regard to the issue under examination are emphasized. Next, comes an article which aims to define the practical need of the administrative contract and the scope of carrying out public duties by the persons employed under an administrative contract. It maintains that introducing the administrative contract in civil service is also a way to ensure the aim of the Civil Service Reform - creating a civil service free of political pressure. The final article of this issue is devoted to the complex overview of the legislation of the Russian Federation on submarine cables. It gives a comparison of the Russian Federation’s domestic provisions with some other states’ national laws and with international law, mainly provisions of the UNCLOS, and gives a comprehensive picture of Russian law in the submarine cables.

I. Doboš / M. Tittlová, Theoretical Aspects of Prosecutor’s Position and Activity in Criminal Procedures in the Slovak Republic [IN ENGLISH]

J. Šimonová, Tax Secrecy in the Context of Information Disclosure in the Tax Proceeding [IN ENGLISH]

B. Sudavičius, [The Exceptional Conditions of Taxation in the Republic of Lithuania: Higher Tax Rates] [IN LITHUANIAN]

A. Rodiņa, Outstanding Legal Business Environment in Latvia: Interaction between the Parliament, the President of the State and the Constitutional Court [IN ENGLISH]

D. A. Shvets, The Experience of the Russian Federation in the Legal Regulation of Submarine Cables [IN ENGLISH]

The Exceptional Conditions of Taxation in the Republic of Lithuania: Higher Tax Rates

Outstanding Legal Business Environment in Latvia: Interaction between the Parliament, the President of the State and the Constitutional Court