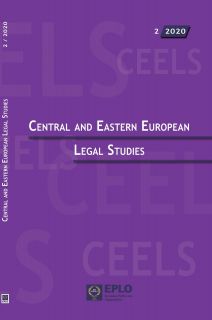 Seven articles coming from Albania, Bosnia and Herzegovina, Greece, Hungary and Ukraine, are included in the second issue of the year 2020 of the Central and Eastern European Legal Studies.

The first paper of this issue examines the effect of terrorist threats on the judicial independence before the 9/11 and after the 9/11. Employing small-N design and using case law data from four different western democracies (US, UK, Germany and France), results indicate that there are variations in court decisions involving similar cases on terrorism-related human rights violations adjudicated before the 9/11 and after the 9/11. The second article proceeds to a thorough examination of the main problems facing national minorities in Europe, focusing on whether the respect for cultural diversity as stated in the Charter of Fundamental Rights also ap­plies to European national minorities, which raises the question of whether national minorities in Europe are a European value. To answer this question, it is necessary to examine a number of concepts and con­ceptual relationships, concluding that although it can be said that the protection of national minorities is one of the European values, this fact raises more questions than it answers. The following article in arguing that the COVID-19 pandemic is a reminder that epidemics may result in a dramatic loss of life at any time, refers to the right to a safe environment, which, in the spirit and tradition of the European Enlightenment, has been incorporated into EU Members’ constitutions and is recognized by the EU Court in specific situations. The article concludes that a spread of unwanted organisms across artificial human envi­ronments is an issue which requires an urgent action from the EU and the United Nations as it is not a matter which can be dealt with effectively on the national basis while artificial anthropogenic environments deserve a high level of specific protection concomitant to that allocated to “pristine” environments. The fourth article deals with trade policy in the USA, which was one of the areas most affected by the Trump administration, that attempted to pursue a more openly and ag­gressively protectionist trade polity. The first part of the article is devoted to the controversy of TTIP, and the second part to the general relations between the EU and President Trump on trade matters; on this basis, the article attempts to answer whether these radical shifts in policy will have a long-lasting effect on trade rela­tions between the USA and the EU. The fifth article presents two models of administrative jurisdiction, which are different but also have meeting points between them: The French administrative jurisdiction, which in addition to discovering its original features, is a model of success for many of the other developed countries of the western world, and the Albanian administra­tive jurisdiction, which is a modest example due to the few years it has been de­veloping, but which tends to reflect the management skills for handling numerous court cases in quantity, but also complex and challenging in qual­ity. The following article analyzes the legal position of the rulers in medieval Bosnia, consider­ing the way in which the rulers came to the throne, the powers they had and the attitude towards the nobility organized in the state parliament. Last but not least, the author of the final article in this issue discusses the necessity for robust decision-making pro­cedures that would ensure consistency in the certification of language competences as well as in professional skills all across Europe. The author maintains that each Member State individually ought to align their legislation on education with the existing European Principles and laws and concludes that all of the above could be achieved through the extension of non-binding regulations, the so-called “soft law”. Finally, the author stresses the importance of the members of the CULT involvement in hig­hlighting the necessity of a uniform certificate of language proficiency.

B. O. Were, Is the Judiciary under Pressure? Judicial Independence in an Age of Terrorism [IN ENGLISH]

R. B. Szaniszló, Europe as a Mosaic of Identities - Nexus of National Minorities and European Values [IN ENGLISH]

O. Zaichuk / Y. Zaichuck, The Tradition of European Enlightenment and the Right to a Safe Environment in the Constitutions of the EU Members and the EU Law after the COVID-19 Pandemic: What History May Teach Us about the Future [IN ENGLISH]

G. Hajdu, Developments in EU-USA Trade Relations during the Trump Era [IN ENGLISH]

S. Savić, The Legal Position of the Rulers in Medieval Bosnia [IN GERMAN]

E. Eleftheroglou, Removing the Legal Vacuum in European Law with a view to a Common Language Certification at an EU Level - Legislative Proposals for Lifting Heterogeneous National Administrative Practices. European Initiatives Aiming to the Harmonization of the Framework [IN ENGLISH]

The Presence and Contribution of the (Eastern) Roman Empire in the Formation of Europe / La présence et la contribution de l’Empire romain (d’...

The Constitutional Law of Privatisations in the United Kingdom