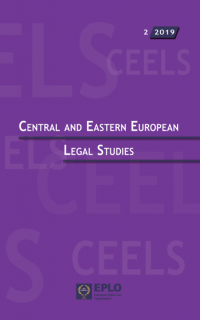 Seven articles coming from Germany, Greece, Lithuania, Slovakia and Ukraine are included in the second issue of the year 2019 of the Central and Eastern European Legal Studies.

The first paper in this issue deals with the procedure of election of judges of the Constitutional Court of the Slovak Republic. It provides not only information about the current legal arrangement of this procedure, but also an overview of some suggested amendments to the Constitution. The second article, coming from Ukraine, reveals the peculiarities of the police bodies’ activity concerning public safety maintenance at the Anti-Terrorist Operation launching stage, in the course of its direct progress and after the beginning of the Joint Forces Operation. The social and legal importance of the activity of the police bodies as public safety ensuring actors in the context of the Anti-Terrorist Operation is outlined. In the following article, the principles that regulate budgetary process in Lithuania are analyzed based on the Constitution, laws in force, decisions of the Constitutional Court. Particular attention is given to the analysis of such principles as program budget, co-ordination of long-term and annual budget planning, observance of fiscal discipline. The fourth articles analyzes the possibility to use regulatory tax norms to regulate competition distortion in the financial sector. Competition distortion in the financial sector is a very actual problem of the Lithuanian financial market. In the article the examples of the Polish and Lithuanian bank levies are used to prove that the regulatory impact of the tax norms might be significant to the financial market. The fifth article discusses tendencies and common patterns in the interpretation of virtual property as well as some approaches to the virtual property taxation. The Ukrainian concept of the property right allows to extend the existing regime of the property right to virtual assets. For the purposes of taxation it is suggested to treat the virtual property as an intangible thing different from intellectual property. The following article deals with the enormous financial challenges associated with the German reunification. The first step to handle these challenges was a program initiated by Chancellor Helmut Kohl that pointed out the further steps for the reunification and the realization of a social market economy. Following the Treaty Establishing a Monetary, Economic and Social Union and, finally, the Unification Treaty the two German states formed a solid framework for a peaceful reunification even though some financial problems could not be foreseen and completely recognised and therefore had to be solved later. Last but not least, the seventh article reviews the EU Treaties of Lisbon and Βologna as a spatial framework for the transnational framework of language certification. The linguistic knowledge assessment system for all the recognized Language Certificates was based on the definition in the Common European Framework of Reference for Languages, defined by the Council of Europe.

B. Balog, Appointment of Judges of the Constitutional Court of the Slovak Republic de lege lata and de lege ferenda [IN ENGLISH]

V. Abroskin, Public Safety Maintaining Bodies of the National Police of Ukraine in the Conditions of the Anti-Terrorist Operation [IN ENGLISH]

B. Sudavičius, The Principles of Budgetary Process in the Republic of Lithuania [IN LITHUANIAN]

P. Gruodis, Tax Norms as a Regulatory Tool for Competition Improvement in the Financial Sector [IN ENGLISH]

M. Brenner, Financial Challenges and Solutions During the Process of German Reunification [IN ENGLISH]

Eμμ. Ελευθερογλου, The Legal Framework within which the Single Language Proficiency Certification System was Born [IN GREEK

The Principles of Budgetary Process in the Republic of Lithuania

Financial Challenges and Solutions During the Process of German Reunification