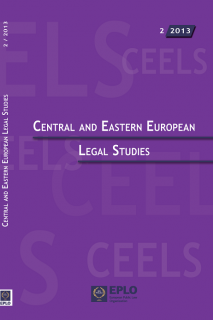 In the second issue of the Central and Eastern European Legal Studies, 2/2013, the countries represented are Armenia, the Czech Republic, Greece, Lithuania, Romania, Slovakia and Ukraine. The first article is devoted to the study of one of the most important innovations of the Lisbon Treaty, the European Citizens' Initiative, and the adoption of the Regulation on the Citizens' Initiative, anayzing the developments in the decision-making process on the adoption of the latter while outlining the role of the financial support in determining the success of the former. The second paper examines the relationship between EU law and the Constitution of the Slovak Republic and the way of its subordination to EU law even in cases where such attitude is harming the enforcement of the Constitution. The purpose of the third article included in this CEELS number is to analyze the institution of the Ombudsman that successfully functions in the Republic of Armenia, while showing the importance of the Ombudsman, revealing the characteristics of the activites of Ombudsmen from different countries, presenting the particularities of the legislative regulation of the Ombudsman in the Republic of Armenia and the positive and negative aspects of this regulation as well as the legislative reforms that could help in improving the institution's work. The next paper deals with the institute of public hearings in Slovakia and in the Czech Republic, as a tool for the involvement of the public in decision-making in public affairs. Another article analyzes the extent of transposition of the right to counsel requirements into the Czech and Slovak legislation on administrative sanctioning, including also the study of the current case law of both the ECtHR and the national instances of these two countries. Issues on the legislation on environmental protection and the respective legislative and enforcement problems in the Republic of Armenia as well as the European experience in this field and the prospects for solving the problem of environmental protection are discussed in the next article. The environmental protection is the theme of the next paper as well, which comes from the Republic of Lithuania, focusing on the question of the financing of environmental protection measures at the local level in this country. Another article studies the origin, evolution and formation of the definition of bioethics in the global scientific thought from Antiquity to the present and examines the interpretation of the term "bioethics" by scientists from different countries, including Russia, Ukraine, Western Europe countries and the USA. Finally, a paper discusses the issue of social participation in the Greek educational system by presenting the legislative initiatives and the structure of the education in Greece, from the point of view of bodies of social participation.

J. DRGONEC, The EU Law in Fragile Harmony with the Constitutional Law as seen in the light of the Slovak Constitution [IN ENGLISH]

К. КАРАПЕТЯН, The Institution of the Ombudsman as an Important Mechanism of Protection of Human Rights [IN RUSSIAN]

M. HODÁS, Public Hearings in Slovakia and in the Czech Republic [IN ENGLISH]

K. FASSOULIS, "Local" Bodies of Social Participation in the Greek Educational System. Ambiguous Laws and Practices and the Ambivalence of the Public Political Discourse (1982-2013) [IN ENGLISH]

The Citizens’ Initiative. A Procedural Decoding

Public Hearings in Slovakia and in the Czech Republic

"Local" Bodies of Social Participation in the Greek Educational System