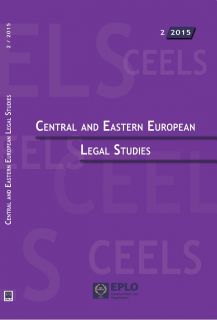 Lithuania, Albania, Armenia, Ukraine, Slovakia and Georgia are among the countries represented in the second issue of the Central and Eastern European Legal Studies of the year 2015. The first article is a study on the Accession Process to the European Union in four countries of the Western Balkans: Croatia, Bosnia and Herzegovina, FYROM and Kosovo. Croatia is a member of the EU since 2013, after having succesfully implemented the Copenhagen Criteria, while the three other states are on their way to the EU, with different time horizons. The purpose of the second article is to analyze the features of political parties in the Republic of Lithuania, the procedures of establishment, registration and termination of political parties, and the legal guarantees of activities of political parties. Special attention is given to the legal regulation of financing and control of financial activities of political parties. The third article is about the rethinking of parenting, taking place thanks to the advent of technology that now allows the control of forms and time of birth with techniques of assisted medical reproduction or artificial insemination. The paper proposes a quick study of the historical and cultural reasons that led to this change, which in addition to legal consequences, leads to a real anthropological change in the conception and in the approach of a child. In the fourth article, it is attempted to provide brief answers to some international legal issues concerning the Armenian Genocide. In particular, issues such as whether the Armenian Genocide was a crime under international law, Turkey's responsibility for the committed crime and the opportunity to appeal to the International Court of Justice are examined. The fifth article focuses on the problem of crime counteraction policy on the ground of modern criminal activity nature in Ukraine. Crime is viewed as a relatively rational, but destructive form of adaptation to the social and economic disparities. It is necessary to shift from combatting crimes to reducing the functionality of deviant social behavior. The sixth article claims that the ECJ has on several occasions confirmed that contracts between contracting authorities cannot be automatically presumed to fall outside the application of EU public procurement law. The rules for the application of in-house exceptions formulated by ECJ were codified in Article 12 of Directive 2014/24/EU on public procurement. The criteria for a public contract to fall outside the scope of public procurement rules are: sufficient control criterion, activity criterion and no private capital criterion. In the seventh article, the author analyzes the methods of public and contractual regulation in the field of labor law in the modern times of menage. It is maintained that the increased role of the contractual adjustment is related to the development of social partnership in Ukraine, the aim of which is the peaceful settlement of the interests of legal subjects, the search of compromise in taking decisions on collective labor disputes, the provision of a social world and a harmonious society. The final article refers to one of the inchoate crime problems, particularly, to the distinction between criminal attempt and mere preparation and general punishment of mere preparation. All mentioned legal issues are analyzed towards Herzog's case, which clearly introduces the paper's supportive approach towards criminalization of general preparation.

U. KARPEN, Implementation of European Government Standards in Accession Countries - Observations of a Consultant - [IN ENGLISH]

B. SUDAVIČIUS / E. VAITIEKIENĖ, Political Parties in the Republic of Lithuania [IN LITHUANIAN]

H. BRAHO, The Concept of "the Right to a Child"! Anthropological and Cultural Aspects leading to this Change [IN ITALIAN]

V. MARGARYAN, Armenian Genocide as an International Crime [IN ENGLISH]

T. MELNYCHUK, Crime as a Destructive Adaptation under the Decreasing Social and Economic Mobility: Ukraine's Experience [IN ENGLISH]

I. ZHIGALKIN, Methods of Adjusting Legal Relationships in the Field of Labor Law [IN ENGLISH]

T. GEGELIA, Legal Analysis of Mere Preparation and its Comparative Analysis towards Other Inchoate Crimes (Commentary towards Herzog's Case) [IN ENGLISH]

Armenian Genocide as an International Crime

Crime as a Destructive Adaptation Under the Decreasing Social and Economic Mobility: Ukraine’s Experience

Methods of Adjusting Legal Relationships in the Field of Labor Law