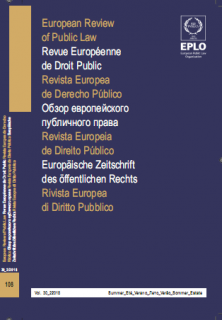 The first article in this ERPL issue aims at analyzing those legal phenomena that can be referred to as ‘transnational’ from the perspective of the territoriality principle and it shows how the ‘deterritorialisation’ of Law has direct implications on the relations between legal systems but also on the summa divisio and on the authoritarian vis traditionally characteristic of Administrative Law, thus opening the door to an Administrative Law that is not exclusive to the State and is based on dynamic relations between legal systems.

The next article deals with institutions of Regulatory Impact Assessment (RIA), namely by independent bodies, adjacent to government or parliament, and analyzes their realization in the Netherlands, the Great Britain, Germany and Sweden.

Last but not least in the section of Articles, the next paper critically evaluates the constitutional and systemic value of the Pál Aranyosi case. The paper maintains that while Aranyosi elevates the Charter to a hierarchical level conditioning the effects of mutual trust and thus guarantees the protection of rights therein enshrined, it does not bring an answer to the potential application of higher national standards. Nevertheless, the role recognized to the national judge contributes to bring some elements of answer to that question and to nourish the reflexion on the articulation of different Union principles.

In the section of chronicles of Constitutional Law, the first one, coming from Cyprus, deals with the Supreme Court’s decision on the election petition no. 2/2016, by which the election of Respondent no. 4, a candidate in Limassol Electoral District, as Member of Parliament was declared null and void.

The chronicle on Italian Constitutional Law informs the reader that, despite the framework of relative political instability, during the year 2017 the Parliament approved significant economic and financial measures, as well as measures to tackle the problems related to immigration and security. The electoral law of the Parliament was also changed, the new electoral system being mixed, majoritarian and proportional, both for the House and for the Senate.

The Constitutional Law chronicle coming from the Netherlands deals with issues such as the formation of a new Cabinet consisting of both centre-right and centre-left parties, the proposal to repeal the Advisory Referendum Act, the Dutch Supreme Court’s judgment confirming that the new legislation - adopted after its decision of 2016 to postpone its substantive judgment on the question whether the life imprisonment in Dutch criminal law is compatible with the ECHR - is ‘ECHR-proof’, as well as the work of the State Commission on the Parliamentary System and some relevant amendments.

The last chronicle in this section comes from Russia and reviews constitutional amendments in 2017, among which a key feature is the ever-increasing concern of the authorities on the freedom of information in the Internet and the media. The year was marked by street protests held by the opposition on various occasions, including the forhtcoming presidential elections and the announced transfer of Saint Isaac’s Cathedral in Saint Petersburg to the Russian Orthodox Church. The Constitutional Court’s judgments related to taxation, with a focus on the Yukos case, are also presented.

The second chronicle in this section analyzes the important decisions and developments in French Administrative Law in 2017, which however were not accompanied by any in-depth changes. Some amongst them concern the rationalization of the functioning of the Administration, others continue with giving rise to legal remedies against acts of soft law. Although the developments of this year have been, mostly, commended by the doctrine, an important reservation has, however, to be made with regard to the protection of rights and freedoms with the transposition in general law of some measures of the state of emergency.

The third chronicle describes the administrative reforms in Italy in 2017: the implementation of the Law on the reform of Public Administration (Law 124/2015) and the main changes introduced, the new amendments introduced by the corrective Legislative Decree of the Code of public contracts, the implementing Legislative Decrees of the Reform of the so-called “Buona Scuola” and the main provisions of the new Code of Third Sector. Finally, the chronicle examines the main measures contained in the Budget Law for 2018.

The last Administrative Law chronicle is devoted to actual amendments of the administrative law occurred in Russia in the field of state antimonopoly control and in public and public-corporate procurement in 2017 and examines the main innovations and changes to the regulations on the contract system in the field.

In the section of Jurisprudence, the chronicle on French Constitutional Jurisprudence analyzes the decisions of the Constitutional Council that were rendered in 2016. The Constitutional Council had, again this year, the opportunity to consolidate its jurisprudence on many points such as on the PQC relating to the impossibility of invoking the grievance of the negative incompetence of the legislator in an autonomous manner. Furthermore, it continues to ensure that no law includes riders and it reminded that the nullum crimen, nulla poena sine lege principle does not prohibit various proceedings from being conducted against a person for the same offense.

This ERPL issue concludes with the review of an interesting selection of books coming from Denmark and Italy.

Y. B. Gülgeç, Presidential Decrees and their Hierarchical Power in the Aftermath of the Constitutional Amendment: A First Glance [IN ENGLISH]

P. Zinonos, The Curious Case of Pál Aranyosi: Precarious Balance or Manual on the Consolidation of Mutual Trust and Fundamental Rights? [IN ENGLISH]

M.J. Vetzo, The Netherlands [IN ENGLISH]

Presidential Decrees and their Hierarchical Power in the Aftermath of the Constitutional Amendment: A First Glance

The Curious Case of Pál Aranyosi: Precarious Balance or Manual on the Consolidation of Mutual Trust and Fundamental Rights?