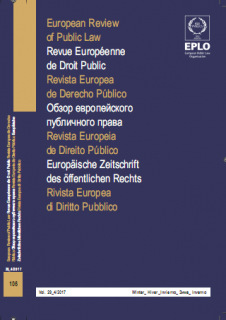 This ERPL issue starts by an article on the relations and interactions between the Executive and the Judicial Power. In this context, the article proposes to deliberate on the current interactions and relations between politics and law. Throughout this deliberation another fundamental question is being dealt with: does European and global integration still allow to take into consideration the specific situation in a country? The second article deals with questions on the temporal applicability of the law of the European Union, which are posed as soon as a new act is adopted by the Union and maintains that the framework that the Court of Justice has set up by laying down principles, can be enriched by transitional provisions. The third article describes the system of payments for the use of natural resources in the Russian Federation by examining the system’s history, development and current state. In the final article in this ERPL issue, the role, characteristics and problems of the model of in-house provision in the context of the arrangements for organizing local public services of general economic interest (SGEI) in Italy, are analyzed.

In the section of Chronicles, the EPRL welcomes Hungary, which is represented in the field of both the Constitutional and the Administrative Law.

The second chronicle in this section comes from Poland, whose institutional practice in 2016 was marked by the crisis on the position and activity of the Constitutional Tribunal. Six so-called corrective acts were passed during the reported period in this respect. In addition, a media statutes package, the law on public prosecutor’s office, the state assistance in upbringing of the children act, an amendment to the act on retirement and benefit, the antiterrorist act are some other important statutes adopted in this period. It is to be emphasized that the Supreme Court declared, following the dispute regarding the Constitutional Tribunal, that judgments publicly announced, even not promulgated, are binding for the court in the juridical sphere.

Next, in the section on Administrative Law, the first chronicle presents the most important decisions of the German Federal Administrative Law, which pertain to fields that acquire increasing importance in the country, such as the building law and the planning law, the environmental law, the Freedom of Information Act, and the asylum law.

The second chronicle in this field provides an overview on the developments in Finnish Administrative Law in 2017: the new Local Government Act came into force in its entirety; drafting of a new Act on Judicial Procedure in Administrative Matters is in progress; the Parliamentary Ombudsman has been given new responsibilites; cases concerning aliens have increased in the administrative courts.

In this same section, the chronicle coming from Poland first informs the reader about the Conference of the Chairs of Administrative Law and Procedure organized in September 2016 on the axiology of Administrative Law. It then presents significant amendments in law, such as the law on education, the law on assemblies and the law on decommunization. Jurisprudence is also covered by the chronicle, which refers to the important decision of the High Administrative Court concerning the consequences of the situation when the authority of the territorial community appears also as a representative of the community and as the body deciding on the case in which the community has a legal interest.

The chronicle on Serbian Administrative Law examines the new systemic law on general administrative procedure (GAPA) adopted in 2016 and fully enforced in 2017, whose main novelties aim at improving the quality and expediency of administrative proceedings, enhancing legal certainty and transparency, strengthening the rule of law and further harmonization with the EU acquis. The author concludes that the true test of GAPA’s success lies in its adequate implementation and presents the factors on which this will depend.

The last chronicle in this section comes from Spain and deals with the legislative activity in the country in 2017, much of which aims to integrate in Spanish law an abundant regulation of the European Union, e.g. Law 9/2017 on public procurement contracts, to which a special reference is made. A reference to the extensive use of the tool of Decree-law is also made, as this has generated several critiques on its excessive use.

This ERPL issue continues with the presentation of eight books received by the EPLO Library whereas an Analytical Table of all papers published in all four ERPL issues of the year 2017 concludes the issue.

L. Trócsányi, Relations and Interactions between the Executive and the Judicial Power: What Evolution and Future? [IN FRENCH]

L. Blatière, The Temporal Applicability of the Law of the European Union [IN FRENCH]

А.Р. Батяева, General Characteristics of the System of Payments for the Use of Natural Resources in the Russian Federation: History, Development and Current State [IN RUSSIAN]

A. Villanueva Cuevas, Spain [IN SPANISH]

Relations and Interactions between the Executive and the Judicial Power: What Evolution and Future?

The Temporal Applicability of the Law of the European Union

General Characteristics of the System of Payments for the Use of Natural Resources in the Russian Federation: History, Development and Current State

The Constitutional Court in 2012

Financial Taxes and the Sand in the Wheels of Financialization: Legal Challenges for the EU Directive Implementing Enhanced Cooperation in the Area...