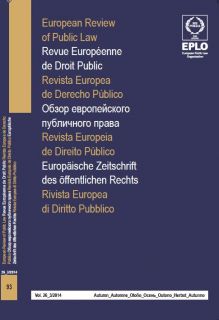 This ERPL issue starts by an article on social rights and sets out the objectives that have to be attained: the search for real equality; the access to social services assured to all individuals and not only to citizens; universality assured through planning; provision of services taking into consideration the technical and other useful characteristics in order to satisfy the cultural needs of the individuals; and composition of the system by public and private institutions. The importance of autonomy and subsidiarity is underlined in order for the national and local interests to be interrelated. The second article, by way of comparison of the Greek and British systems, tries to evaluate the effectiveness of the Fixed-term Parliaments Act, which was passed in 2011 by the UK Parliament as a response to the abusive recourse to dissolution. The article finally proposes transplanting the Act into the Greek constitutional system in order to limit the actual powers of the Prime Minister and thus devise new checks over the executive power appropriate for the new political reality of coalition governments. The third article looks at the Federal Republic of Germany in comparison with other federations in view of the basic federal idea and the distribution of competences and powers between federation and Länder. The constitutional arrangements for financing federal and Länder levels are explained in detail and a current issue is finally raised: the German Finance Constitution in need of reform. The principle of transparency in EU law is the theme treated in the last article included in this ERPL issue: the principle of transparency obliges public authorities to provide accessible, accurate and comprehensible information, but the concrete obligations derived from the principle vary significantly with regard to whom information should be communicated to, the specific information concerned, and when access should be provided. The reasons behind a given obligation and the manner in which transparency contributes to the realisation of legally recognised goals will determine the answer to these questions.

In the section of chronicles on Constitutional Law, the chronicle coming from Austria discusses the "project of the century": the introduction of administrative courts at first instance on Federal and Länder level, which came into force on January 1, 2014. With the strengthening of the judicial review system by introducing a so-called "law complaint", this change will also be complemented in constitutional court proceedings. With the multi-level debate on reform regarding the expansion of direct democracy instruments as well as the introduction of a new fundamental right of freedom, the Austrian constitutional law remained very animated.

The following chronicle discusses the amendment to the Slovak Constitution approved by the Slovak Parliament on June 4, 2014 by examining in its first part the legal and political context of the amendment to Article 41(1), i.e. "traditional marriage protection" and in its second part changes related to the Articles on the judiciary, such as the composition of the Judicial Council and the introduction of the security clearances for judges.

In the chronicle on Turkish Constitutional Law, the establishment of the Conciliation Commission which consisted of only four political parties represented in the Grand National Assembly of Turkey as well as its dissolution by the ruling party, AKP, are examined. The author identifies the lack of people's participation in the Constitution-making process as the most dramatic failure of the Conciliation Commission and concludes that developments in the constitutional field reveal legal chaos and political instability.

The last chronicle of Constitutional Law published in this ERPL issue comes from Ukraine and provides an overview of the changes in the constitutional and legal regulation of the right of Ukrainian citizens to freely elect and be elected to bodies of state power and local self-government. It also presents the dynamics of the 2013 constitutional legislation in the field of human rights in Ukraine.

Next, in the section of Administrative Law, a chronicle coming from Belgium gives an overview of the recent reforms of the Conseil d'Etat of Belgium in jurisdictional matters. All procedural measures taken, connected to the reorganisation of the institution in a more managerial sense, are examined in the chronicle, which maintains that the reform helps to achieve the same objective: a faster and more efficient administrative justice.

The chronicle on Portuguese Administrative Law aims to provide the reader with a comprehensive and sufficient overview of the political drive and innovations in the field of administrative law in Portugal in 2013 and 2014 in the context of the Portuguese government's obligation to meet the milestones it undertook, most particularly as concerns the implementation and continuation of the privatisations programme.

In the section of Jurisprudence, the chronicle on the CJEU Jurisprudence states that once more the European citizens have been in the centre of the major cases dealt with by the EU judicature which were focusing on the exercise of the European citizens' rights in the framework of the activities developed in the national and European institutions and bodies and especially on the judicial protection they should benefit from, at home as well as at EU level.

The chronicle on Portuguese Constitutional Jurisprudence examines the most important decisions of the Portuguese Constitutional Court, which in 2013 issued 862 decisions. Most of them refer to concrete constitututional control while a high number of decisions refer to strictly political matters (e.g. elections, referenda, political parties). The most significant decisions regarded public servants and pensioners whereas tax law, penal issues, freedom of exercise of a profession, family law and access to justice also gave origin to important decisions of the Court.

This ERPL issue is concluded by the Book Reviews Section, in which two Book Reviews chronicles presenting and commenting on latest editions in Austria and Ukraine respectively are included. In addition, reviews on important public law books received by the are included in this section.

Overall, this is an issue of the ERPL where, as is the standard pursued by the Review, many topical issues are discussed and a multinational overview of developments in the Constitutional and the Administrative Law of several countries is given.

ARTICLES
A. MATTIONI, Social State and Social Rights [IN FRENCH]
A. VLACHOGIANNIS, The Fixed-term Parliaments Act of 2011: A Model for Reform of Greek Parliamentarism? [IN ENGLISH]
U. KARPEN, Fiscal Federalism in Germany [IN ENGLISH]
V. TSEVRENIS, Human Rights and Poverty in Greece Today: The Reality of Their Mutual Contestation [IN ENGLISH]
A. BUIJZE, Transparency: The Swiss Knife of EU Law [IN ENGLISH]

The Fixed-Term Parliaments Act of 2011: a Model for Reform of Greek Parliamentarism?

Human Rights and Poverty in Greece Today: The Reality of their Mutual Contestation

The Constitution in Northern Ireland - After the Scottish Independence Referendum

Failure of the New Constitution-Making in Turkey