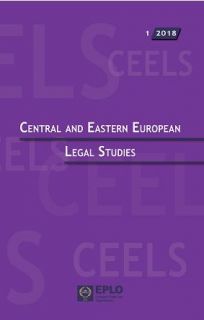 Six articles on law developments in Hungary, Poland, FYROM, Slovakia, Lithuania, Serbia and Bosnia and Herzegovina, are included in the first issue of the year 2018 of the Central and Eastern European Legal Studies.

It should be pointed out that this issue features the representation of Hungary in the CEELS, by an article on the relations and interactions between the Executive and the Judicial Power.

In this context, the first article in this issue proposes to deliberate on the current interactions and relations between politics and law. Throughout this deliberation another fundamental question is being dealt with: does European and global integration still allow to take into consideration the specific situation in a country? The following article provides a conceptual framework for analyzing current discussions in crisis areas that appear on the international scene. More in particular, in the European Union, the primary problem seems to be a contradiction between the national and supranational principles. The aim of this article is to point out the reasons for the ideological crisis or the liberal crisis in the European Union. The third article tries to analyze the framework of administrative disputes in the Former Yugoslav Republic of Macedonia, mainly the Law on Administrative Disputes and its consolidation with the international standards, specifically with the ECHR. The efficiency of social and legal systems, viewed according to mathematical principles and regularities, is dealt with in the fourth article included in this issue. The author maintains that an over-hasty, intensified production of new legal norms, wihtout some revolution in their quality and in the quality of the legal system as a whole, must tend to reduce that legal system’s efficiency and functionality or even cause its collapse. The fifth article deals with the question of public finance law as part of the law system of the Republic of Lithuania, with particular attention placed on the analysis of the system of sources of public finance law which has some peculiarities. The subject of the final article of this issue are the election and dissolution of the local representative body, as well as its relationship to the local executive, as possible sources and conditions of its legitimacy. The authors use on the one hand the legal method in order to analyze the relevant legal provisions in the systems of local self-government of Serbia and Bosnia and Herzegovina and on the other hand the comparative method between these systems and the systems of local self-government in other former Yugoslav republics.

L. Trócsányi, Relations and Interactions between the Executive and the Judicial Power: What Evolution and Future? [IN FRENCH]

M. Práznovská, The Crisis in the European Union?

B. Sinani, Standards of the European Court of Human Rights in the Area of Administrative Law with Special Focus on the Former Yugoslav Republic of Macedonia

D. Šmihula, The Effectiveness of Social Organizations and Legal Systems, and Prevention of their Collapse

B. Sudavičius, Public Finance Law as Part of the Legal System of the Republic of Lithuania [IN LITHUANIAN]

S. Orlović / G. Marković, The Legitimacy of the Local Representative Bodies: The Case Study of Serbia and Bosnia and Herzegovina

Relations and Interactions between the Executive and the Judicial Power: What Evolution and Future?

The Crisis in the European Union?

The Effectiveness of Social Organizations and Legal Systems, and Prevention of their Collapse

The Legitimacy of the Local Representative Bodies: The Case Study of Serbia and Bosnia and Herzegovina