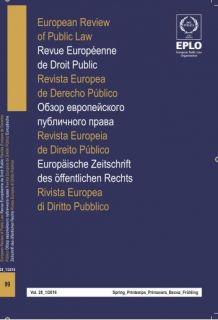 In this issue of the ERPL are published the proceedings of the annual conference of the EGPL organised from the 11th to the 13th of September 2015 on the island of Spetses (Greece), on the subject "The New European Economic Governance".

Under the heading "General Introduction: The Powers of the Union in the European Econonomic Governance: New Transfers of Sovereignty", the first paper claims that European integration is facing one of the most difficult, but at the same time, challenging periods of its life, the European crisis not yet having been overcome and the new Asian crisis approaching. The report aims to point out and stimulate the debate on issues strictly related to the "monetary governance" of the European Union. It illustrates the most important issues concerning the European Monetary Union and the establishment of the European Central Bank. In order to discuss the problem of whether a political union is advisable or even necessary, the European experience is compared with the origings of central banking of two "integrating" countries (the United States and Italy). The second paper under this heading argues there is a major concern among the Member States and within the Union itself, that the survival of the monetary union is dependent on the further development of unitary structures, which means: more integration. It looks at the constitutional questions of the last major prospective plan in this respect, the "Report of the five presidents of the Union", which deals with further developments in the economic, financial, fiscal and political Union, and it tries to highlight some pivotal questions that have to be answered before such a plan can be driven forward.

The next heading is titled "The European Banking Governance". According to the first paper under this heading, several legal acts have been adopted by EU financial regulators, which reshaped the regulatory and supervisory framework pertaining to the EU banking system. The main by-product of this response was the establishment of the European Banking Union and, in particular, of the Single Supervisory Mechanism, the Single Resolution Mechanism and the Single Resolution Fund. These three components should be considered in unison, given that shared liability for bank resolutions requires centralized supervisory oversight. The next paper under this heading claims the Single Supervisory Mechanism is a major development in the area of Economic and Monetary Policy, as it is entrusted with the prudential supervision of European credit institutions and confers very significant powers on the European Central Bank, including coercive and investigatory powers. Due to those powers, a system of checks and balances has been introduced, in which the European Parliament and the Court of Justice of the European Union play a significant part.

Under the heading "The Guarantees of the States Participating and Not Participating in the Banking Union and in the 'Fiscal Compact'", the first paper deals with the regime of close cooperation with the European Central Bank by non-euro Member States which decide to opt in. The difficulty of putting them on an equal footing with euro Member States is not adequately addressed by the rules on the suspension and termination of the close cooperation; therefore, an amendment of the Treaty on the Functioning of the European Union would be needed. In the next paper under this heading, the topic of guarantees from States participating or not in the Banking Union is discussed, as one's guarantees can be perceived as risks for others. A distinction is made between preventive and remedial guarantees against potential infringements of the interests of Member States, and it is claimed that, although safeguarding the States' consent remains an essential guarantee, it is not always realistic, and therefore other ways, such as a furthering of the accountability procedures, should be further exploited.

In the "General Conclusions", four main issues are discussed: a) the changes that have occured in the European economic governance to contrast the great crisis initiated in 2008, b) the features of the European Banking Union, c) the role and attitude of the European and national judges facing the new discipline and d) the democratic legitimation of the new European banking system. It is argued that the new system is providing an effective package of quick, effective and reliable measures and that the new European banking law and the Banking Union represent a positive development in the integration process.

The second part of this ERPL issue includes papers presented or prepared within the framework of Workshops that took place during the Conference. In the context of the Workshop on "Financial Inclusion: Services of General Economic Interest in the Banking Sector and Citizen's Rights", the first paper examines the concepts and main characteristics of financial inclusion referring to its definition and content, to the typical indicators for its measurement as well as to its causes. It also examines the policy aspects related to financial inclusion. Moreover, the correlation between financial literacy and financial inclusion is analyzed whereas also the link between technology and financial inclusion is also briefly presented. The next short study underlines the main features of Directive 2014/92/EU of the European Parliament and of the Council in relation to the access to payment accounts with basic features. The Directive is a tool to fight against financial exclusion in a general European movement that seems to progressively consider some banking activities as services of general economic interest. The next paper analyzes the originality of the public law system connected to the European Banking Union and examines the Italian experience as an example of the non-reducible space remaining to the State in this framework. In the context of the Workshop on "Normative Defeasibility in Public Law", the following paper is a brief introduction on the core ideas of normative defeasibility in public law. The main points are to understand what normative defeasibility is and to demonstrate that every norm within a legal order is defeasible, which means that defeasibility is a property of legal norms. In the context of the Workshop on "The New Legal Status of Railway Companies in Europe and in China", the next paper finds similarities in the evolution of the Chinese and European railway systems since, in both cases, the starting point was a national public monopoly, which is progressively open to competition. European Law, although at a more advanced stage of this process, is still facing issues that the Chinese system is now addressing, like regulation of the network's utilization and determination of prices.

The third part of this ERPL issue comprises the speeches by Professors Marco D'Alberti and Elisenda Malaret on the "Celebration of the 100 Years from the Birthdate of Massimo Giannini".

CH.V. GORTSOS, Financial Inclusion: An Introduction [IN ENGLISH]
J. PONCE, Directive 2014/92/EU of the European Parliament and of the Council, of 23 July 2014, and the Access to Payment Accounts with Basic Features [IN ENGLISH]
V. FERRARO, Public Law Approaches toward the European Banking Union: A Focus on the Italian Experience [IN ENGLISH]

D. DUARTE, A Brief Note on Normative Defeasibility in Public Law [IN ENGLISH]

HUAIDE MA / TH. DESTAILLEUR, The New Legal Status of Railway Companies in Europe and in China [IN ENGLISH]

The European Union at the Monetary Turning Point: Towards Genuine Integration or Dis-integration?

The Powers of the Union in the European Economic Governance: New Transfers of Sovereignty

The European Banking Union: An Introduction to the Legal Framework

The European Banking Governance. The Single Supervisory Mechanism and the Union’s Constitutional Challenge

Directive 2014/92/EU of the European Parliament and of the Council, of 23 July 2014, and the Access to Payment Accounts with Basic Features

Public Law Approaches Toward the European Banking Union: A Focus on the Italian Experience

A Brief Note on Normative Defeasibility in Public Law