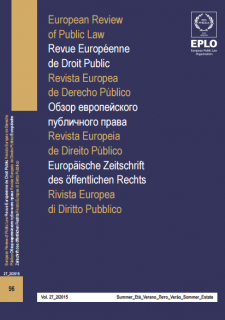 This volume of the ERPL starts with an article dealing with the reconsideration of public intervention in the financial sphere in connection with the concept of financial exclusion. The national banks of EU Member States, pursuant to Directive 2014/92/EU, will be obliged to offer payment accounts with basic features, which creates the right to open such a payment account, while some precautions are taken in relation to money-laundering. Finally, it is considered whether the banking activity should be understood as an economic service of general interest. The second article claims Public Financial Management has its roots in public policy, economics, law, political science, business studies and is widely considered to be a political and institutional rather than a purely technical and accounting process. Well-structured Public Financial Management systems may certainly help address the challenges of the current global financial crisis and also facilitate the ongoing fiscal adjustment process. In the third article, it is argued that the government and administration of central and local levels are put through difficult trials as far as their financial situation is concerned. Local administration may improve effectiveness and efficiency of budget-keeping by applying modern methods of New Public Management and good Regulatory Impact Assessment. It is the mandate of the legislator to set the frame for autonomous, vital and creative local governments and to empower them - including the provision of financial resources - to master the problems of their citizens. In the next article, it is maintained that Italy has been the first nation worldwide which has imposed the protection of the cultural heritage and of the landscape as a fundamental principle of the Constitution, but planning has always been deficient and therefore the State introduced, starting from the year 2010, a binding opinion on landscape authorization. The conclusions of the article announce the existence of a genuine landscape law. In the fifth article, it is noticed that an increasing number of constitutions contain "unamendable provisions" in order to protect essential characteristics of the constitutional order or principles perceived as being at risk of repeal via the democratic process. The paper studies the text of unamendable provisions in 735 former and current written national constitutions and argues that the limitations are utilized to preserve a core of a nation's constitutional identity, thus comprising its "genetic code". Finally, the sixth article raises the question of the autonomy of the concept of sanction in substantive law, argues that the concept of sanction is making its presence tangible in the jurisprudence of the European Court of Human Rights, while it is also claiming the concept's autonomy in everything we can characterize as the European law enforcement universe.

In the section of chronicles on Constitutional Law, the first chronicle examines the case Ioannidou & Others v. Republic through the Treasury of the Republic of Cyprus, dated of October 7, 2014, the subject-matter of which is the administrative decisions for "suspension" of the payment of the retirement pension of the applicants. The majority decision of the Supreme Court of Cyprus held that the applicants' pensionary rights constitute property rights, and as such the contested decisions were declared null and void.

The second chronicle underlines the three main internationally recognized features of a central bank's governance and describes how the National Bank of Georgia and Georgian legislation meet these international requirements.

The third chronicle examines the resignation of Italian Prime Minister Enrico Letta following the decision of his party to change the cabinet, the appointment of Matteo Renzi, whose cabinet is supported by parties belonging both to the centre-left and the centre-right, his promotion of an agreement with Silvio Berlusconi to approve some electoral and constitutional reforms and the annoucement of President Napolitano's intention to resign.

The fourth chronicle refers to the celebration of the 200th anniversary of the Netherlands, during which period the Dutch Constitution has proved to be of great value in shaping and regulating the Dutch society and legal order. Given the stringent amendment procedure of the Constitution, it is unlikely that proposed amendments to it will be enacted into law in the near future. It also notes other developments such as the practice of 'seat banditry, the inauguration of the new Head of State King Willem-Alexander, the SGP-case, the Vereniging Martijn case and the upcoming trial against Geert Wilders, all three of importance for human rights in the country, and the decentralization proposals carried out by the government in 2013 and 2014.

The final chronicle of this section focuses on a number of significant amendments made to the Russian Constitution in 2014, a year that is remarkable for the increase in legislative initiatives and the legislative activity of the federal parliament in comparison with the previous years, revealing the intention to preserve the existing political regime, to strengthen the presidential power and suppress the political opposition and the foreign influence in favor of the state interests, a tendency which has an adverse effect on fundamental human rights.

Next, in the section of Administrative Law, the first chronicle focuses on the rich developments in French Administrative Law, marked by the strengthening of the role of the administrative court. On the legislative level, the law on the provisions regarding the fight against terrorism as well as the establishment of a semi-public company consisting of a single operation purpose dominate the developments, whereas the exercise of the principle "silence is deemed to signal acceptance" keeps on requiring measures of implementation.

The next chronicle discusses the developments in administrative law and jurisprudence that took place in the Netherlands in 2014-15. Overall, Dutch administrative law seems to be moving away from its recent infatuation with efficiency towards a more balanced approach.

The first chronicle in the Jurisprudence section provides an overview of the 28 final judgments that deemed to bear the highest level of importance and were selected for publication in the Reports of Judgments and Decisions 2014 of the European Court of Human Rights. The discussion is structured under different headings, with reference to the main Convention Article concerned, while reference is made to the main parts of the judgments.

This ERPL issue concludes with the Book Reviews section, with two chronicles coming from Italy and the Netherlands respectively, while the section finishes with reviews of important public law books that were received.

Overall, this is another issue of the ERPL where, as standardly pursued by the Review, many topical issues are discussed and a multinational overview of developments in the Constitutional and Administrative Law and Jurisprudence of several countries is presented.

SUMMARY / SOMMAIRE
ARTICLES
J. PONCE, Private Banks, Services of General Interest and Prevention of Money-laundering with regard to Corruption [IN ENGLISH]
E. G. BALTA, Towards a New Sustainable Public Financial Management in Times of Crisis [IN ENGLISH]
U. KARPEN, Legislation Plan to Strengthen Local Finance [IN ENGLISH]
S. FLORIO, The Prism of the Landscape: An Italian Run [IN FRENCH]
Y. ROZNAI, Unamendability and the Genetic Code of the Constitution [IN ENGLISH]
S. LYTRAS, The Concept of Sanction in the Field of European Law Enforcement: Criminal or Disciplinary Law? [IN FRENCH]
CHRONICLES / CHRONIQUES
I. Constitutional Law / Droit constitutionnel

Private Banks, Services of General Interest and Prevention of Money-Laundering with Regard to Corruption

Towards a New Sustainable Public Financial Management in Times of Crisis

The Prism of the Landscape: An Italian Run

Unamendability and the Genetic Code of the Constitution