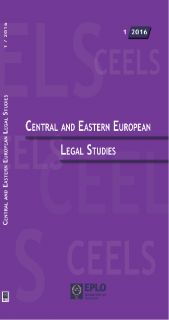 In the first issue of the year 2016 of the Central and Eastern European Legal Studies, seven articles coming from CEE countries such as Albania, Bosnia and Herzegovina, Lithuania, the Slovak Republic and Ukraine deal with topical public law issues.

The first article investigates the theoretical, practical, judicial and legislative effects of Protocol 12 to the European Convention on Human Rights (General Prohibition of Discrimination) in the first decade of its implementation, involving three Balkan states: Bosnia and Herzegovina, Croatia and Serbia. The following article approaches several responses on a long-term basis concerning the theoretical and operational pillar of the policies and strategies specific to the crisis, pro¬moted by the European Union. The effects of the crisis are profound and have determined new approaches of public management and the European administrative system, triggering also the transformation of public administration, expressed in administrative simplification, reducing bureaucracy and administrative burden, etc. The third article analyzes the legislative function of the parliaments of Bosnia and Herzegovina, Serbia, and Montenegro. This analysis aims to help in improving the legal solutions and practical functioning of parliaments which are sometimes equated with being legislative rubber stamps. In the fourth article the author studies the principle of effective legal protection in the administrative law of the Slovak Republic by mainly discussing and analyzing the constitutional framework, the rights-based perspective, the institutional perspective, the European perspectives and the level of effective legal protection of individuals in this field. The following article makes the case for considering the principle of fairness from the objective standpoint of society and the subjective positions of the individual. The author suggests that the social and personal significance of a criminal offence in their legislative regulation and enforcement practice be included as components in such categories of evaluation of fairness as the guarantee of human rights and the trend of criminal justice. The questions of local taxes and powers of self-government institutions on tax regulation in the Republic of Lithuania are dealt with in the next article. The article deals with the question of the competence of local self-government institutions in the field of tax regulation. Particular attention in the article is given to the analysis of such powers as the power to set the rates of some taxes, to set and apply tax advantages, etc. In the final article of this issue, attention is focused on the mechanisms of decision-making in local self-government and their democratic deficit and more in particular on the mechanism for creating council commissions as one of the instruments for the involvement of outside experts in the local self-government decision-making processes. This is seen both as an indicator of transparency in the policy-making process and as an oversight by the citizens.

Ž.Rašević,Ten Years of the ECHR Protocol 12: The Balkanisation of Non-discrimination [IN ENGLISH]

A. Matei / O. M. Chesaru, Long-term Responses of the European Commission in the Context of the Economic Crisis [IN ENGLISH]

G. Marković, Comparative Analysis of the Legislative Function of the Parliaments of Bosnia and Herzegovina, Serbia, and Montenegro [IN ENGLISH]

R. Kaššák, The Principle of Effective Legal Protection in the Administrative Law of the Slovak Republic [IN ENGLISH]

N. Savinova, Social and Personal Significance of the Criminal Offence: The Issue of Fairness [IN ENGLISH]

B. Sudavičius, Local Taxes in the Republic of Lithuania. Powers of Self-government Institutions on Tax Regulation [IN LITHUANIAN]

Ľ. Malíková / M. Daško, Mechanisms of Decision-making in Local Self-government and Their Democratic Deficit: The Slovak Case [IN ENGLISH]

Ten Years of the Echr Protocol 12: The Balkanisation of Non-discrimination

Comparative Analysis of the Legislative Function of the Parliaments of Bosnia and Herzegovina, Serbia, and Montenegro

Social and Personal Significance of the Criminal Offence: The Issue of Fairness

Mechanisms of Decision-making in Local Self-government and their Democratic Deficit: The Slovak Case

“The Dialogue of the Judges” - National Courts and European Courts: Spain

Rights of Foreigners: The Netherlands

An Overview of Foreigner’s Rights in the Spanish Legal Order