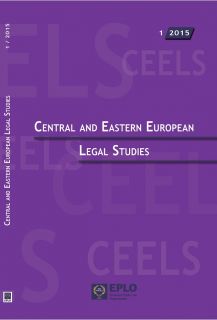 There are nine articles in the first issue of the Central and Eastern European Legal Studies for the year 2015 coming from Ukraine, Austria, Germany, Turkey, Slovakia, Latvia, Georgia and Lithuania. The first article is devoted to the issues of formation of limited government in a sovereign Ukraine. The analysis of its experience confirms that the existence of democratic institutions and procedures is not sufficient safeguard against the usurpation of power. Attention is focused on the importance of formation of the constitutional system of limited government in Ukraine based on the European model. The second article is about how generating a thorough and trusted status of information is a priority for effective and coordinated disaster management and relief measures delivered by GOs and NGOs in the surroundings of a critical event. The QuOIMA-project, funded by the Austrian Ministry of Transport, Innovation and Technology, focuses on the various possibilities to use publicly available, open source data generated in the sphere of traditional and social media. One of those means is the new and emerging crowd tasking approach, a promising and high potential area for the involvement of community members. The third article is a study of the constitutional and statutory law-provisions as well as the Rules of Procedure of the Constitutional Court of Kosovo, one of the youngest Constitutional Courts in Europe, which reflects the standards of most such modern institutions. The purpose of the fourth article is to introduce the long constitutional solution-seeking period of Turkey by referring to historical, legal and political developments, and to evaluate the constitution-making process after the parliamentary elections in 2011. The fifth article, coming from Slovakia, argues that the addressees of legal norms have a legitimate right to expect that any restrictions on their fundamental rights through the legislation are the result of broad discourse in which all of the participants had been given the opportunity to familiarize themselves with the matter under consideration and to present their informed opinion. In the sixth article, the author explains the theory of the fundamental rights in the Republic of Latvia, the content and basic rules of locus standi to be observed in order to submit to the Constitutional Court a special type of petition - the constitutional complaint. By examining several conclusions, which follow from the case law of the Constitutional Court, the author attributes particular importance to the decisions with ex tunc effect proving that these allow considering the constitutional complaint as a real weapon against the state and unconstitutional laws. The seventh article aims to highlight political and legal issues and media campaigns relevant to the referendum on the so-called traditional family held in Slovakia in 2015, which was deemed invalid because of insufficient turnout. The penultimate article is a broad comparative analysis in the field of rule of law that draws on a wide array of case law from various Central, East and Southeast European Constitutional Courts. It illustrates that those are far more than guardians of national constitutions, but actors in the European Integration process of their countries. The final article deals with the problem of implementation of the principle of long-term budget revenues planning in the Republic of Lithuania. It analyzes the legal definition and the essence of short-term and long-term budget revenues planning and the reasons for transition to long-term revenues planning.

O. BORYSLAVSKA, The System of Limited Government: The European Model and Ukraine's Experience [IN ENGLISH]

U. KARPEN, Pronouncement of the Constitutional Court's Judgements, Securing their Implementation and Enforcement. Some Observations from Kosovo [IN ENGLISH]

A. TOPUKCU, The Processes and the Principles of Constitutional Design in Turkey - Historical and Legal Perspective - [IN ENGLISH]

M. HODÁS, Legitimization, Public, Opposition and the Law-making [IN ENGLISH]

A. RODIŅA, The Legal Person Before the Constitutional Court [IN ENGLISH]

D. KROŠLÁK, The Referendum on the So-Called Traditional Family in the Slovak Republic [IN ENGLISH]

A. DEVIDZE, Judicial Activism of Constitutional Courts as a Means of Promoting EU Integration: The Case of Georgia [IN ENGLISH]

Б. СУДАВИЧЮС, Co-Ordination of Short-Term and Long-Term Budget Revenues Planning in the Republic of Lithuania [IN LITHUANIAN]

New Opportunities and Challenges for Participation in Crisis and Disaster Relief