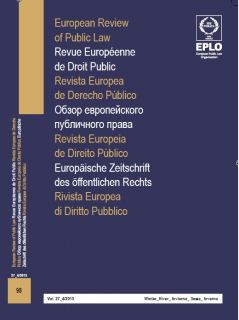 The ERPL is proud to publish in this issue an article by H.E. the President of the Hellenic Republic Prof. P. Pavlopoulos on the Contribution of Administrative Justice to the Consolidation of the Rule of Law. In this article it is maintained that the rule of law requires the existence of a state, the organization and function of which are governed by legal rules. The breach of those legal rules produces, through the appropriate sanctioning mechanisms, legal consequences. The most important sanctioning mechanism is the one based on the organization and functioning of the judiciary, especially the Administrative Justice. Therefore, the analysis is divided in two parts: first, the institutional nature of the right to petition and receive judicial protection is explored, while in the second part the legal peculiarity of the public law dispute through which it becomes easier to decipher the contribution of Administrative Justice to the cosolidation of the rule of law and the principle of legality is examined.

Three articles follow in this ERPL issue. The first of these focuses on Regulatory Impact Assessment (RIA) in Germany, namely in Parliament and describes the work of the independent "National Regulatory Control Council" while it looks into RIA mechanisms in the two houses of Parliament, namely the Federal Diet (Bundestag) and the Federal Council, which is the "House of States" (Bundesrat). The next article presents a research on Independent Regulatory Agencies (IRAs) in Greece and their degree of independence in connection with their structure, the privileges of their members and the types of control that they are subject to. This research clarifies and makes suggestions as to what is necessary to change in order to have more efficient independent agencies. The last article in this issue aims to explore the role that may be played by foreign constitutional experience in relation to the protection of fundamental rights within constitution-amending processes. It intends to demonstrate that both constitutional theory and the method of public comparative law converge in requiring the application of at least three conditions to assume that the imitation of a foreign Constitution can contribute to raising the level of protection of fundamental rights in contemporary pluralistic legal systems: the historical, economic and social background, the structure of the judicial system and the role of the doctrine.

The second chronicle provides an analysis of the elections of the European Parliament and the Saeima in Latvia, the year 2014 covered herein being marked as an election year in the country. The European Parliament elections were held for the third time, with the voters being very inactive due to a number of reasons, common in many European countries. The biggest part of this chronicle is dedicated to the Saeima elections.

The chronicle on Polish Constitutional Law maintains that in 2014 the constitutional and legislative framework for State organization and fundamental rights protection in Poland remained stable, although some events of that year may be interpreted as foreshocks preceding and presaging the major constitutional crisis which erupted in the autumn of 2015. The major developments in Constitutional Law are therefore examined, among which the elections for the European Parliament and the first round of local elections, a tapes scandal involving top Polish politicians, a cabinet reshuffle, new legislation adopted and the case law of the Constitutional Court.

The Constitutional Law chronicle coming from Serbia briefly presents the Serbian Constitutional Court's ruling on the constitutionality of a law passed in 2014 to reduce the burden of the state budget imposed by pension payments, as part of the Government's austerity measures.

The last chronicle in this section comes from Spain and deals with the solemn proclamation of King Felipe VI of Bourbon and Greece as king of Spain after the adbication of his father Juan Carlos I of Bourbon in 2014. In the same year, the popular consultation about the future of Catalonia was held.

Next, in the section of Administrative Law, the first chronicle maintains that the decisions of the German Federal Administrative Court in 2014 show that the building law, especially the planning law, needs to be adjusted. Moreover, there was a more refining balanced development in the civil service law, which now more considers the needs of the civil servants with part-time employment. The Freedom of Information Act is also examined as well as the jurisdiction of the Federal Administrative Law on other areas such as environmental law, fiscal and tax law and police law.

The second chronicle in this section provides an overview of the developments in Finnish Administrative Law and Jurisprudence, such as the new Local Government Act, the new Non-Discrimination Act, the comprehensive legislation promoting good administration, in an ongoing effort to improve the integrity of public administration, the appointment of the Committee on Ethics of State Civil Servants and the decisions of the Supreme Administrative Court on the right to vote in the election of the Sámi Parliament.

The chronicle on Serbian Administrative Law deals with the role and place of the Ombudsman in the country. The Ombudsman successfully plays a key role in scrutinizing the work of the executive and enforcing the good governance principle. Still, noticeable attempts to interfere with his work became more prominent. The chronicle concludes that the extent and level of coordination of the administrative authorities with the Ombudsman have to be improved with the hope that the Ombudsman will assume a proper role in the future.

The final chronicle of this section maintains that the local and regional elections but, most importantly for the purposes of the chronicle, the General Elections which were held on December 20, 2015 and the results of which are uncertain, resulted in three consequences in the strictly normative field: a) a "normative overproduction" by the State, b) preference was given to the management and legal reform of administrative issues that, due to the necessity to confront other urgent situations in times of economic crisis, have been regulated in the first years of the legislature and c) the implementation of the announced reform of the general legal framework of the Spanish Public Administrations. This reform resulted in Law no. 39/2015 on the common administrative procedure and in Law no. 40/2015 on the legal (internal) system of the public sector, the analysis of which occupies the biggest part of this chronicle.

This ERPL issue continues with the presentation of nine books received by the EPLO Library while the reader can find an Analytical Table of Contents of all four ERPL issues of the year 2015.

Summary / Sommaire
H.E. The President of the Hellenic Republic Prof. Prokopios Pavlopoulos, Reflections on the Contribution of Administrative Justice to the Consolidation of the Rule of Law [IN ENGLISH]

Articles
U. Karpen, Current Situation and Prospects of Regulatory Impact Assessment (RIA) in Germany, Namely in Parliament [IN ENGLISH]
M.-E. Ioannou, The Level of Actual Independence of Independent Regulatory Agencies (IRAs): A Reflection from the Greek Legal System [IN ENGLISH]
A. Cardone, Protection of Fundamental Rights and Constitution-amending Process: A Theoretical Hypothesis about Constitutional Borrowing [IN ENGLISH]

U. KARPEN. Current Situation and Prospects of Regulatory Impact Assessment (RIA) in Germany, Namely in Parliament

The Level of Actual Independence of Independent Regulatory Agencies (IRAs): A Reflection from the Greek Legal System

Protection of Fundamental Rights and Constitution-amending Process: A Theoretical Hypothesis about Constitutional Borrowing