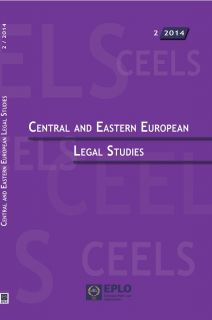 Albania, Greece, Lithuania, Slovakia, and Ukraine are the countries represented in the seven articles included in the second number of the year 2014 of the Central and Eastern European Legal Studies, 2/2014. The first article, coming from Albania, examines the balance between freedom of expression and protection of reputation. The former is explicitly provided in Article 10 of the ECHR whereas the latter is entailed from the Convention as a limitation to the freedom of expression. However, the European Court of Human Rights ruled several times that both are guaranteed equally, without any hierarchy between them. The second paper examines the constitutional protection of ownership in Slovakia which had occurred in society at the break from socialism to capitalism. Socialist collective ownership existed in two basic forms: State ownership and co-operative ownership. Besides these two basic forms, also small private enterprises and personal ownership of natural persons could have existed. The guaranteed of the State onwership by the legislators of the Constitution of the Slovak Republic are also presented in the article. The third article included in this CEELS number deals with the theme of the general theory of national security, which, according to the author who has analysed numerous research papers on the theme, could alternatively be labelled as natiosecuritology from the Latin 'natio' – a tribe, people; and 'logos' – a science, study, movement, while preference is given to the first title. The author maintains that the general theory of national security represents an essential element of intellectual cultures of the mankind. The next paper is devoted to the pilot friendly settlement in the European Court of Human Rights as a special category of the conciliation procedure, as well as to contemporary problems of execution of decisions of the European Court of Human Rights against Ukraine. Another article discusses the questions of whether it is appropriate to establish the age of consent and related issues in the Ukrainian legislation by analysing the relevant provisions of the Convention on the Protection of Children against Sexual Exploitation and Sexual Abuse of 2007 and the case law of the ECtHR. Prison-privatisation programmes, facilitated by the international economic downturn, is the subject treated in the next paper: Private prisons are examined in three different European legal systems (English, French and Greek). Finally, a paper deals with the problem of the tax advantages in Lithuanian tax law. Special attention is given to questions of the legal definition and to the analysis of the content (legal forms) of tax advantages. According to Lithuanian tax law, the main legal forms of tax advantages are: tax exemption; decrease of the tax basis; diminution of tax and application of preferential tax rate.

M. Prençe, Relationship between Freedom of Expression and Protection of Reputation [IN ALBANIAN]

V. Lipkan, Conceptual Framework and Nature of the General Theory of National Security [IN ENGLISH]

С. Бурма, The Pilot Friendly Settlement in the European Court of Human Rights: Experience for Ukraine [IN UKRAINIAN]

O.V. Mamich, Age of Consent in the Case Law of the European Court of Human Rights and Treaty Based Obligations of Ukraine before the Council of Europe [IN ENGLISH]

J. Kitsos, The European Perception on Private Prisons: A Comparative Study on the Delegation of Penitentiary Services to the Private Sector [IN ENGLISH]

B. Sudavičius, The Exceptional Conditions of Taxation in the Republic of Lithuania: The regulation of Tax Advantages [IN LITHUANIAN]