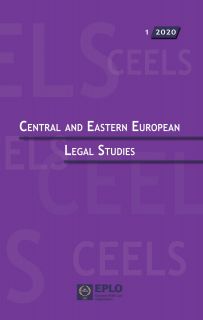 Seven articles coming from Greece, Lithuania, Russia, Slovakia and Ukraine are included in the first issue of the year 2020 of the Central and Eastern European Legal Studies.

The first paper in this issue examines the trends and components of legal globalization and its impact on the development of constitutionalism in modern realities. An analysis of the concepts of “global law”, “global legal pluralism”, as well as the principles of formation of “European constitutional law” is performed and different approaches to the essence of the concept of “global constitutionalism” are revealed. The second article proceeds to a thorough examination of the territory where common policies as regards European languages had been born, as well as an analysis of the principles and rights relating to linguistic competence. An organic link of language competences to education diplomas and professional rights at a transnational and Union level is also attempted. The connective tissue between the principle of non-discrimination and language proficiency as well as, in addition to the principle of equality and equivalence in foreign languages, the principle of multilingualism as a token of linguistic democracy also come under scrutiny. The objective of the following article is to examine the legal basis for protection of children under international and European law: The first part of the paper deals with international law, specifically the Hague Convention on Parental Responsibility and the Abduction Convention, and the analysis of the term “grave risk of harm”; the second part deals with the new Brussels deter Regulation; and the last part deals with the new developments in the return cases, based on the improvements of the Brussels recast as well. The following article deals with various international aspects of protecting children from exploitation. It notes that in today’s world, children are subject to various forms of exploitation as well as physical, mental and emotional abuse. Recently, attention and action by states has focused on violations of children’s rights in many of these serious forms of violence against children. Slavery and debt bondage, the use of children in armed conflict, domestic servitude and other forms of exploitation of children should be prohibited. Last but not least, in an article coming from Lithuania the author examines and defines tax obligation as the specific legal relation between tax-payer (debtor) and the State (creditor) in which both of them have not only duties but also rights. Such relation arises from tax acts, adopted by the Parliament. Therefore, tax obligation cannot be an object of agreement between the State and the actual tax-payer. Particular attention in the article is given to the analysis of free-will means of discharge of the tax-payers’ duties, such as: payment of the taxes (including tax overpayment); succession on tax debt; respite of tax payment, etc.

B. Sudavičius, Means of Discharge of Tax Obligation [IN LITHUANIAN]

Protection of Multilingualism and Language Education at Union level: Professional and Academic Rights