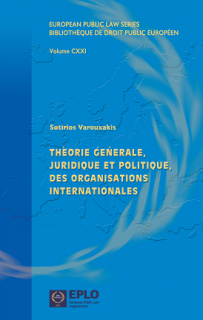 The study is divided into three Parts:

First, the Part on “International Organizations and Law” constitutes the Legal Theory. This Part examines from a legal point of view the creation, personality, institutional structure, operation and actions of Intergovernmental Organizations.

The Epilogue draws some conclusions on the influence and usefulness of International Organizations whereas some general considerations on the issue are added.

Ambassador ad h. Sotirios Varouxakis served in different posts of the Greek Ministry of Foreign Affairs and in Germany, Turkey, Luxembourg, as well as the European Commission in Brussels. He has served as Ambassador in Kuweit, Qatar, Bahrein, Israel and the Netherlands. He was Ambassador-Representative at the Process of Barcelona and the Union for the Mediterranean, member of the Governing Council of the Foundation for the Dialogue between Cultures, and was elected Deputy Secretary General of the Union for the Mediterranean in Barcelona.