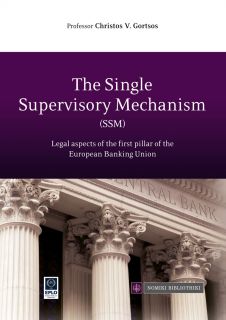 This study mainly intends to provide a comprehensive account of the provisions of the conceptually solid, but institutionally complex, framework pertaining to the European Single Supervisory Mechanism (SSM), which is the first pillar of the European Banking Union (EBU) and became operational on 4 November 2014. It is structured in seven (7) sections.

The institutional framework of the SSM forms part of the new European Banking Law, which has been (and is still being) formulated gradually since 2008 in order to address in a systematic and efficient manner the problems identified during both the recent (2007-2009) international financial crisis, and the current and ongoing euro area fiscal and debt crisis. In view of the latter, the need for a further Europeanisation of the "bank safety net" was deemed necessary, resulting in the establishment of the EBU. In this framework, the Council Regulation governing the SSM (1024/2013) confers on the European Central Bank "specific tasks" with regard to the micro-prudential supervision of credit institutions, thus converting it, in essence, to a banking supervisory authority, in addition to its monetary policy and other tasks.

This study will prove a useful tool for jurists and economists aiming at understanding in depth the functioning of the first pillar of the EBU, and in general seeking up-to-date information concerning the general directions of the European financial policy. It is also of interest to students of law, economics and political studies, who wish to deepen their knowledge of European Banking Law.

An extensive list of primary and secondary sources, and a useful alphabetical index, complete this work, which is published by the Greek publisher NOMIKI BIBLIOTHIKI in collaboration with the European Public Law Organization (EPLO).

The author is Professor of International Economic Law at the Panteion University of Athens (Department of International, European and Area Studies) and the Secretary General of the Hellenic Bank Association.