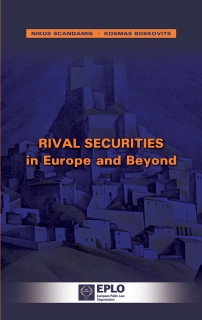 Rival Securities in Europe and Beyond

Liberty and security form a highly ambiguous conceptual pairing whose internal tension has never ceased to increase, in particular within the borderless societies of a world driven globally but still operating in institutional fragments. This is a tension understood and treated differently according to various normative horizons which interconnect at different levels, national, transnational or global. The European paradigm reveals its novelty by integrating people while marking their trace as plural; it favours a precarious symbiosis as a result of this continuous creation of liberties, which proves more and more difficult to manage. Delineating and safeguarding liberties as reassessed and reordered transnationally implies new schemes of powers holding together the body politic and the citizen. Diverse conceptions of liberty and security come to light, as political and legal claims have to compete within horizontal patterns of governance instituted by the European Union, parallel and in opposition to the vertical patterns of government still dominating its Member States. The tension, already latent in balancing Liberty and Security, becomes exacerbated: Liberty is enhanced by security of person but diminished by security of state. This balance is subjected to differentiated modes of governance, which the relevant legal orders construct, through particular sets of rules, as shifting institutional enclosures responding to their internal principles: Making such discrepancies governable becomes a vital issue for the individuals and their status in the modern world.

Nikos Scandamis is Professor emeritus at the University of Athens, international lawyer and former Director at the European Commission. His writings on European integration favour an interdisciplinary approach towards law, economics and political philosophy.

They both steered the research team of the University of Athens (Faculty of Law) for two major research programmes on Liberty and Security launched by the European Commission (ELISE and CHALLENGE).

The Jurisprudence of the ECtHR as a Common European Constitution

Administrative Law in Europe: A Historical and Comparative Perspective