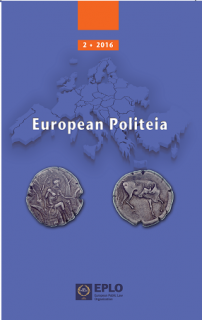 In the Theoria part of this issue, the first article by Kyriakos Kentrotis and Dimitrios Akrivoulis first focuses on the existing critique drawing from “moral economy” theories, according to which the European project has abandonded its own ideaized “gift economy”, that is the founding principles of solidarity and equality, in favor of an immoral market economy. The article then offers an alternative narrative of the historical development of European integration, pointing out at the relation between the gift and the expectation of a gift in return (doron-antidoron). It is in this light and read in parallel with the historical development of neoliberal capitalism that the progress of European integration is represented in the article. The next article by Sofia Mitsiopoulou studies the mutations of the concept of decentralization in connection with the market and more in particular the market for airport and port infrastructures. More in particular, it studies the French reform carried out in 2004 and highlights the evolution of the concept of decentralization towards the one of “governance”. The third article in this section by Mary Anagnou addresses the issue of tolerance and diversity in Greece in view of the migration/refugee crisis. After examining the interlink between migration and racism, giving an overview of the current situation and emphasizing the contrasting strategies for combating racism and migration, it attempts to identify the reponsibility for the issues raised. In the next article Metaxia Kouskouna and Tenia Kyriazi examine the scope of the 2011/36/EU Directive on preventing and trafficking human beings and protecting its victims and assess the added value of the Directive from a human rights law perspective using the ECtHR relevant case law and the recommendations of European experts’ bodies in the field. The final article in the section of Theoria focuses on results of in-depth interviews in order to examine the cases of female migrant live-in domestic workers from the Philippines and male refugee manual laborers from Palestine and the effect of their work and employment in precarious, low-status/low-wage jobs on their participation in primary and secondary solidarity groups.

In the Praxis section, Dimitrios Pyrgakis presents the Hellenic Council of State’s decision regarding the law on licensing providers of free-to-air digital terrestrial television broadcasting, whereby the Council of State annulled the ministerial decision conferring the power of organizing the licensing procedure on the Secretariat of Information and Communications. The next paper by Eirini Spanaki deals with the issue of the enactment of exceptions to the determination of Sunday as a public holiday regarding the operation of commercial stores and the relevant judgement of the Hellenic Council of State which annulled the contested act. Finally, Georgia Skiada in her paper maintains that the most serious tax evasion infringements can be classified both as administrative and criminal offenses.

Kyriakos Kentrotis / Dimitrios Akrivoulis, European Union and the Economy of the Gift

Mary Anagnou, Tolerance and Diversity in Greece: Mapping Racism and Discrimination in the Shadow of the Migration/Refugee Crisis

Metaxia Kouskouna / Tenia Kyriazi, Updating the EU Anti-Trafficking Legal Framework: A Study of the Role and Value of the 2011 EU Directive on Trafficking in Human Beings

Tolerance and Diversity in Greece: Mapping Racism and Discrimination in the Shadow of the Migration/Refugee Crisis

Updating the EU Anti-Trafficking Legal Framework: A Study of the Role and Value of the 2011 EU Directive on Trafficking in Human Beings