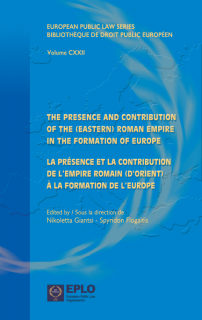 In this EPLS volume are published the proceedings of a colloquium, organized in Athens from the 18th to the 19th of April 2013, by the European Public Law Organization, on the subject “The Presence and Contribution of the (Eastern) Roman Empire in the Formation of Europe”. The colloquium was organized with the kind support of the Ecole française d’Athènes and the Hellenic Bank Association.

The book follows the different thematics of the colloquium which were: “The Model of Power”, “Oikoumene: New Frontiers - A Novel Way of Acquaintance and Interaction”, “The World of Ideas”. It also includes the speeches delivered in the context of the Roundtable discussion on “Discovering Historicism in the Administration of Justice” as well as the General Conclusions drawn at the end of the colloquium.