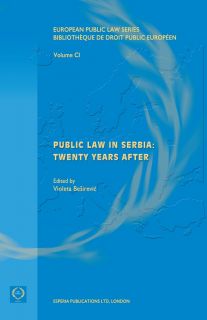 This is a work elaborated within the framework of a series of country books prepared on the occasion of the 20th anniversary of the European Group of Public Law, depicting the evolution of Public Law in countries represented in the EGPL. With this series, the EGPL wishes to offer each country represented within it, the opportunity to present what its nationals members of the Group consider to be the most significant transformations or innovations that have taken place in their national legal system in the past 20 years, from both an empirical and a doctrinal perspective.

This book on Public Law in Serbia aims to offer insights into the transition process (Part I), the separation of powers (Part II), the protection of rights and freedoms (Part III) and new challenges with public law flavors (Part IV).

SUMMARY
V. BEŠIREVIĆ, Introduction
I PATH OF TRANSITION
V. BEŠIREVIĆ, Transitional Constitutionalism in Serbia: Is the Glass Half-Full or Half-Empty?
N. DIMITRIJEVIĆ, Transitional Justice in Serbia
II SEPARATION OF POWERS REVISITED
M. GRUBAČ, Constitutional Judiciary in Serbia
M. PAJVANČIĆ, The National Assembly as a Legislator: Achievements and Limitations
T. MARINKOVIĆ, Contemporary Challenges of Judicial Independence in Serbia
J. JERINIĆ, Judicial Review of Administrative Action in Serbia from the Perspective of the European Convention on Human Rights
III HUMAN RIGHTS: SOMETHING OLD, SOMETHING NEW
M. JOVANOVIĆ, Constitutionalism and Collective Rights: The Question of Conceptual Compatibility
R. ŠABIĆ, The Right to Free Access to Information of Public Interest in the Serbian Legal Order
T. PAPIĆ, The More You Ignore Me The Closer I Get: Application of the European Court of Human Rights’ Standards on the Journalistic Duty of Care in Serbia
M. RELJANOVIĆ, Briefing Ombudspersons in Serbia
IV NEW CHALLENGES
V. PAVIĆ, Revolution, Evolution and Devolution: Overview of the Past Twenty Years of Competition Legislation in Serbia
A. ČAVOŠKI, Development of Environmental Law and Policy in Serbia