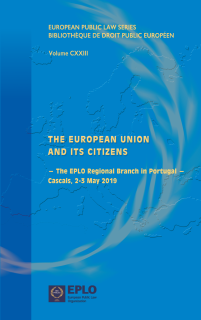 The European Union and its Citizens

– The EPLO Regional Branch in Portugal –

The European Public Law Organization organised, from the 2nd to the 3rd of May 2019 at the Centro Cultural de Cascais & Casa de Santa Maria, in Cascais, Portugal, on the occasion of the inauguration of the EPLO Regional Branch in Portugal, an International Conference on the subject: “The European Union and its Citizens”, with the generous support of the Municipality of Cascais.

This EPLS volume comprises papers presented by eminent academics on the occasion of the Conference, on the thematics of “The Relevance and Value of European Integration” and “The Actions of the EU for its Citizens”, as well as the EPLO-Cascais Declaration for Europe that Prof. Giuliano Amato, Judge at the Constitutional Court of the Italian Republic, Former Prime Minister of Italy, presented in closing the Conference, in presence of H.E. Hon. Eurico Jorge Nogueira Leite Brilhante Dias, Secretary of State for Internationalisation, Portuguese Republic.

P. Romano Martinez, Dean of the Faculty of Law of the University of Lisbon

S. Flogaitis, Professor at the Faculty of Law, University of Athens, Director of the European Public Law Organization

The Relevance and Value of European Integration

H. Legal, Unity and the Pace of Integration

The Actions of the EU for its Citizens

J.-B. Auby, The Contribution of EU Law and Policies to Territorial Development

The EPLO-Cascais Declaration for Europe