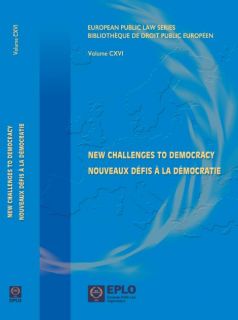 In this volume, are published the proceedings of the annual Conference of the EGPL organised from the 12th to the 14th of September 2014, on the subject "New Challenges to Democracy". Many prominent law scholars and legal personalities from all over Europe and the world participated in this Conference and contributed to the dialogue on the theme.

Under the heading "General Introduction: Judicial and Political Power - Where is the Dividing Line?", first a paper considers the role of judges which has been expanding worldwide, even on constitutional and political issues and concludes that the judges should use their wide powers with a wise moderation. Under this same heading, a second paper examines the growing power of judges, which influences the concept and organisation of the separation of powers and concludes that it is through the requirement of impartiality as a point of departure that the relationships between politics and justice can be redefined.

Another heading is dealing with the theme of Constitutional Imperatives, that is Transparency, Participation and Legal Certainty. The first paper under this heading maintains that democracy requires maximal transparency of 'public information' while, on the contrary, limiting transparency of 'personal information'. The digital era generates threats for democracy and the Rule of Law and therefore there is a need for an adequate protective legal framework and for the main legal protagonists to face the new informational and societal challenges. Dealing with the same theme of Constitutional Imperatives, another paper examines the useful effects but also the dark side of transparency, participation and legal certainty, which are fundamental cornerstones of a civil-rights based, procedural vision of administrative action. Under this heading, an Intervention also presented at the Conference follows, which provides an overview of a discussion on democratic legitimacy and accountability in the EU's economic governance that has been engaged since 2012 between EU institutions and Member States and distinguishes five successive strands and stages of debate: proposing general designs for a 'genuine EMU', the enquiry on the 'Troika', the Expert Group on joint issuance of public debt, the judicial dialogue between the Bundesverfassungsgericht and the European Court of Justice on ECB action, and the politicisation of the Commission through the 'Spitzenkandidaten'.

Under the heading "Does More Law Mean Less Democracy?", a paper discusses the gradual developments regarding the integration process of the EU and, in that connection, the democratic character of the EU decision-making and draws conclusions as to the perspectives of further integration in Europe as well as the degree of democracy, efficiency and effectiveness of the EU decision-making process.

National reports follow this heading, coming from Albania, Armenia, Cyprus, Denmark (two reports), Georgia, Greece, Poland, Portugal, Serbia, Slovakia, Turkey and Ukraine. The authors of the national reports based their contributions on a questionnaire on "New Challenges to Democracy" divided in three sections. The questionnaire is included in this EPLS volume.

A Case Study uses the national reports as a basis on which the new challenges to democracy can be discussed in a practical and realistic manner and presents the overall impression in a brief manner, a more detailed analysis having already been provided by the individual reports.

The Conclusions maintain that democratic government cannot deliver freedom and fairness on its own. The judges are the guardians of three essential standards: reason, fairness and the presumption of liberty and their authority depends only on the quality of their reasoning. They must exercise restraint in human rights issues but they also must be robust in ascertaining and defining the constitutional authority of the European Union.