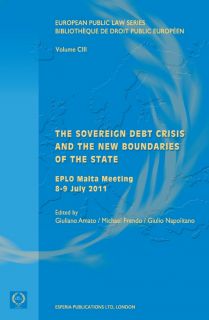 This volume of the European Public Law Series comprises of the proceedings of the first of a series of EPLO Malta Meetings, successfully inaugurated in 2011. The meeting was held in July 2011 at the Palace, Valletta, Malta, under the auspices of Prof. Giuliano Amato, former Prime Minister of the Republic of Italy, and The Hon. Dr. Michael Frendo, Speaker, House of Representatives, Parliament of Malta, and it was scientifically coordinated by Prof. Giulio Napolitano, of the Roma Tre University.

This publication presents the views of politicians and of distinguished public law scholars on the theme of “The Sovereign Debt Crisis and the New Boundaries of the State”. National perspectives coming from Germany, Greece, Ireland, Turkey and Albania are also presented.