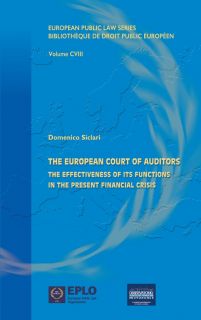 The European Court of Auditors, The Effectiveness of its Functions in the Present Financial Crisis

In the light of the repercussions of the global financial crisis on the States and the European legal system, it is appropriate to establish institutions able to analyse and control public finances. The book starts with a comparison between the audit models of the Eurozone; an analysis necessary in order to understand the role of the European Court of Auditors in the context of European public authorities and its progressive functional expansion since 1975.

Specific attention is reserved to the organisational aspects and guarantees. However, the focus is on the functional aspects of the Court that, under the Treaties, extend beyond the external audit, to the consultative function and the obligation of assistance to the European Parliament and the Council.

The historical profile is accompanied by a reflection on the current state of the institutional relationships and coordination with the national institutions and by the possibility of granting additional functions to the Court.

Domenico Siclari (Reggio Calabria, 1984) is a Researcher in Administrative Law at the University for Foreigners “Dante Alighieri” of Reggio Calabria, where he teaches Public Law. He obtained his PhD in Public Law from the University of Rome “Tor Vergata”. He has conducted research in Italy and abroad. Among the research topics are: Local authorities, environment, public procurement, liability of public administrations, protection of rights, ADR and cultural heritage legislation. He is also the author of numerous publications, among which: La Corte dei conti europea nel sistema multilivello dei controlli (2012), La evolución de los pilares de la “democracia ambiental”: “Participación Pública” y “Acceso a la Justicia” (2011), Responsabilità e violazione di norme sovranazionali (2011). He is a Member of journals and master scientific committees.

Chapter One
Supreme Audit Institutions in the European Union

2.1 The Countries of Central and Northern Europe

3.1 The Italian Corte dei Conti: A Synthesis of Functional Dualism

1.1 The Progressive Development of the European System of Accounts

1.3 The Basis for the Creation of the EU Court of Auditors

1.4 The Emergence of the Court of Auditors and its Statement among the EU Institutions

2.2 Requirements of the Members

Chapter Three
Mandate and Functions
of the European Court of Auditors

1.1 The Role of the European Court of Auditors

1.2 Introduction to the Audit Function

2.3 The Scheme for Sound Financial Management

3.1 Control of the European Court of Auditors and its Functional Dimension

1.1 The Court’s Framework for Audits

1.2 Means for Carrying Out Control Activity in general. Contextualisation of Examination of Documents

2.1 The Phase of Testing and Reporting

1.1 Inter-institutional and Coordination Relations with the National Courts of Audits: From Partnership to a Multi-tiered System of Financial Control

1.2 The Connections between the Supreme Institutions of Control in the light of the Contact Committee’s Intervention

2.1 The European Court of Auditors in the Framework of the Economic/Financial Crisis. Reflections for a Revision of the Role and Functions of the Court

2.2 Proposals in Force and Possibilities of Extending the Role of the European Court of Auditors: From an Integrated Control System to a Jurisdictional Organisation System?