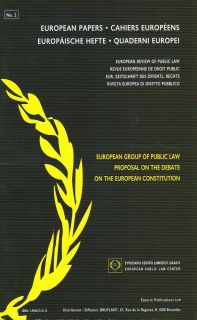 This Report (January 2003) constitutes the output of the scientific work of the European Group of Public Law on the key-issue of the European Constitution. This contribution broadly reflects the views of a great number of experts in the field of European Law and European Public Law that came together under the presidency of Guy Braibant to exchange ideas and set forth proposals for the de­bate at the time taking place within the Convention on the Future of Europe; a de­bate which would determine to a great extent the institutional structure of the future Europe and would, in turn, influence the destiny of the peoples in Europe. It has been considered, therefore, a responsibility for those academics throughout Europe be­ing members of the European Group of Public Law to become active members in this historical coincidence.

PROPOSAL ON THE DEBATE ON THE EUROPEAN CONSTITUTION

5. Human Rights within the EU - The Case of the Charter of Fundamental Rights

6. Citizens, Powers and the Rule of Law
6.1 The European Citizenship
6.2 Judicial Protection of Citizens