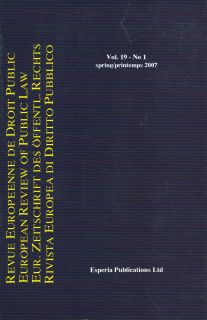 The concept of European Citizenship is rather a new one for Albanian reality. It is more doctrinal than practical one. Every person holding the nationality of a Member State of the European Union is a citizen of the Union. Citizenship of the Union shall complement and not replace national citizenship. EU citizenship is a set of rights additional to those of national citizenship. The process of integration in European and other international structures brought to the attention of Albania the need for adoption of legislation with a new contemporary physiognomy. Many Convention/Agreements were ratified by Albania dealing with legal and illegal migration. They brought a new perspective for domestic legislation and Albanian institutions. Among other things, the rights of third-country nationals have been introduced in our domestic legislation, according to international acts, and Albanian legislation, too. Appropriate structures are established to deal with problems regarding third country nationals, such as: refugees, asylum, the right of residence, visas, immigrants, etc. The adhesion of Albania in European structures, the assignment of Stabilization-Association Agreement lately (in June 2006), affected domestic legislation by improving it. Stabilization and Association Agreement (SAA) between Albania, and the Community and its Member States, also includes provisions on the prevention and control of illegal immigration and readmission that requires high commitment to their implementation. The terrorist attack of September 11th showed again that terrorism is a world-wide enemy that infringes the peace and threatens all humanity. The Republic of Albania strongly supported the International community against terrorism and was part of international coalition to combat terrorism. In this regard, there were changes made to domestic legislation and institutional development as well. Establishing appropriate structures committed to combat terrorism, within governmental agencies, a better cooperation with other countries to face with these criminal phenomena, will be strong means against this threaten for all humanity, in order to create a peaceful climate and fruitful political-economical cooperation among different countries.

Η Μεσόγειος και ο Κόσμος / The Mediterranean and the World

Law and Religion in the Mediterranean