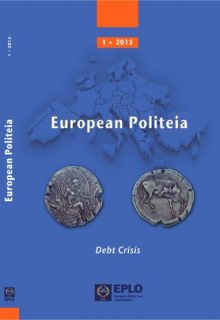 Legislative Compliance with the Economic Adjustment Programmes for Greece: An Overview and an Attempt at a Typology (2010-2013)

Legislative Compliance
with the Economic Adjustment Programmes for Greece:
An Overview and an Attempt at a Typology
(2010-2013)

This paper provides an overview of the legislative measures taken by the Greek authorities, in the framework of the First and the Second Economic Adjustment Programmes for Greece, between 2010 and 2013. Although the relevant literature has primarily focused on the legal status of the Memoranda, as well as their economic and other implications, comparatively little has been written to describe in a systematic manner the multitude and diversity of all measures that were actually implemented over a period of four years, in compliance with the commitments undertaken by the Greek authorities. This article proposes to cover this gap by organising the material at hand into two main sections: fiscal survival measures and structural reform measures. In the course of the presentation of the various reform efforts that were undertaken, we attempted to highlight especially the fact that the Greek authorities, apart from achieving the milestones and benchmarks of the Programmes, had to constantly revise their objectives in view of the recession, which was deeper and longer than expected, as well as because of the implementation problems they had to face. However, in spite of the undisputed progress that has been made up to present, reforms still need to continue, while implementation risks to the Programmes unfortunately remain very high.