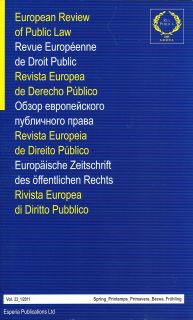 The purpose of this contribution is to highlight the role that European citi­zenship has come to play as a constraint on domestic administrative deci­sions on nationality. This dynamic can be illustrated by discussing the Rottmann decision, adopted by the European Court of Justice in March 2010[1].

The Rottmann judgement has been criticized essentially on the ground that it fails both to protect the right of the individual concerned not to be stripped off of his nationality and to acknowledge the autonomy of Euro­pean citizenship vis-à-vis domestic nationality. In this paper, I argue that most of these criticisms are based on an error of perspective. Those who attack Rottmann seem to look at the case from a constitutional, if not phi­losophical, point of view, while the relevance of Rottmann should rather be assessed in an administrative law perspective.

Rottmann halts the idea of a European post-national citizenship, in so far as its acquisition and loss will still depend on the acquisition and loss of domestic nationality: Rottmann makes clear that, unless an amendment of the treaties takes place, no EU citizenship will emerge beyond the nation-state. My alternative claim is that European citizenship seems prone to become a post-nationalist (rather than post-national) legal tool, in so far as it pushes nationality beyond nationalism. After Rottmann, EU citi­zen­ship not only keeps limiting the power of the state to discriminate accord­ing to nationality, as it did before, but it also begins to constrain the dis­cretion of domestic authorities in adjudicating nationality cases. That dis­cretion, being built upon sovereignty and public order concerns, has been traditionally very wide. Behind it, nationalist instincts leading to ethnic or religious discriminations may still be easily hidden. Constraining admin­istrative discretion in nationality cases in the name of European citizenship may serve the purpose of piercing the veil and make those discriminations less likely.

This argument will be developed in three stages. First, a brief illustration of the Rottmann case is provided. Secondly, some of the harshest criti­cisms addressed to that judgement are illustrated. Thirdly, a different reading of Rottmann is offered, which requires administrative lenses to be worn.