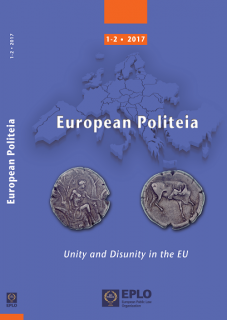 Former Deputy Prime Minister of Greece and Minister of Finance.
Member of the Greek Parliament.
Professor of Constitutional Law at the Aristotle University of Thessaloniki

Democracy and solidarity are fundamental values of the European Union and key components of the European legal and political culture. Nevertheless, there are aspects of these fundamental values which constitute structural problems of the path towards European integration. The crucial issue in the pillar of democracy is that democratic legitimacy is organized - and is therefore sometimes guaranteed and sometimes disputed - primarily at national level, at the level of the political systems of the Member States, without sufficient counterweight to democratic legitimacy at the level of the EU itself. The constantly renewed mandates of the national governments of many Member States are in clash with the current political direction of the EU, particularly in the area of economic policy, which - since the Maastricht treaty - derives from the primary law of the Union itself. The fact that they are all ultimately subject to the current policy does not mean that there are no problems of democratic legitimacy. As far as the pillar of solidarity between Member States is concerned, the economic crisis of the last decade has shown that when solidarity (e.g. in the form of rescue programs) is organized between economically uneven Member States (in terms of e.g. fiscal status, growth and competitiveness, size of per capita income), the expression of solidarity does not prevent the reproduction of inequalities between Member States.

* Speech at the seminar organized by the Kalliopi Koufa Foundation on the Promotion of International Law and the Protection of Human Rights in the framework of the Jean Monnet program ‘Discourses on EU and Human Rights’, on the theme: European fundamental values: the pillars of democracy and solidarity, Thessaloniki, Piraeus Group Cultural Foundation Hall, 8.12.2017.