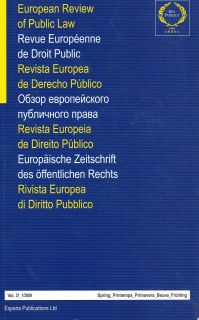 As a consequence of Romania’s accession to the European Union, a better organi­zation of the public administration was necessary, in order to cope with the new challenges. Thus, Romania, as a country at the external border of the Union, en­tered a new period which implies the efficient security of the external borders, mi­gration control, as well as preparing and adopting the necessary measures for the elimination of the internal border controls (for the purpose of subsequently joining the Schengen space). All these considerations called for a closer cooperation be­tween the competent authorities in the field and the reform of the system in order to meet the requirements. Romania, with regard to exercising its competencies on the population, is placed in a double position: State of origin and State of receipt. The State’s prerogative to establish the legal regime applicable to the persons under its jurisdiction, is considered exclusive and discretionary, but must take into ac­count two important postulates: the regime of its citizens must not bring irreversi­ble damage to the fundamental human rights, and the regime of aliens must not prejudice their interests or the interests of their States of origin.

Η Μεσόγειος και ο Κόσμος / The Mediterranean and the World

Law and Religion in the Mediterranean