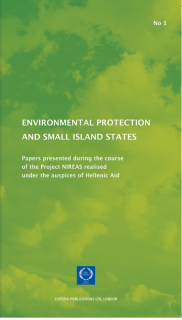 No. 1, “Environmental Protection and Small Island States - Papers presented during the course of the Project NIREAS realised under the auspices of Hellenic Aid”

Following the international concern on the protection of Small Island Developing States - SIDS, the Euro­pean Public Law Center - now European Public Law Organization, supported by the Greek Ministry of Foreign Af­fairs and in collaboration with the University Consortium of Small Island States (Trinidad and Tobago), organised between 2006 and 2008 a series of Workshops on “Environmental Protection of Small Island States” in Mauritius, Trinidad and Tobago and the Fiji Islands with contributions from European legal scholars and scholars from SIDS (Project NIREAS).

In this first publication within the framework of the European Environmental Law Series, is published the outcome of this initiative, enriched by the contributions of experts from the Council of Europe’s Bern Convention Secretariat, only hoping to open herewith the floor for a fruitful scientific discussion on a new global climate regime.

FOREWORD by G. SIOUTIS, Professor at the National and Capodistrian University of Athens

ARTICLES
W. ANDERSON, Perspectives on Caribbean Environmental Law
K. CHAMBERS, Environment Management in South Pacific SIDS: Fiji Islands Environment Management Act 2005
P. CLARKE, Access to Information, Public Participation and Access to Justice in Environmental Matters
P. CLARKE, Biodiversity Conservation and the Law in the Pacific Islands
M. GAETHLICH, The Blue Flag Programme: An Instrument for the Enforcement of Sustainable Development in Coastal Areas
C. LASÉN DÍAZ, Addressing the Impacts of Climate Change on Biodiversity and its Adaptation Needs at the Regional Level: The Work of the Bern Convention
E. LEVANTIS / B. DAINKEH, From Trail Smelter to Kyoto: In Search for a Compass (Still…)
O. LIM TUNG, The European GMO Framework: An Inspiration for the Mauritian GMO Framework?
G. B. MAHARAJ, A Caribbean Perspective
J. F. ORUETA, International Efforts to Conserve Biological Diversity in Islands
A. PAPAPETROPOULOS, Environmental Impact Assessment: European Law
CHR. PETROU, European Environmental Legal Framework: Between Flexibility and New Modes of Regulation
I. STRIBIS, The Protection of the Marine Environment in the South Pacific: Regional Institutions and Instruments
I. TZORTZIS, Oil and the Law: An Environmental Impact Assessment

ANNEX, Mauritius Strategy for the Further Implementation of the Programme of Action for the Sustainable Development of Small Island Developing States