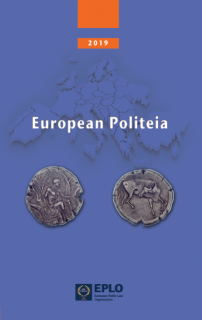 The Mechanics of Representation and the Autonomy of Parliament: Proposals for the Reinforcement of the Representative Body

The Mechanics of Representation and the Autonomy of Parliament:
Proposals for the Reinforcement of the Representative Body

PhD, Law School of National and Kapodistrian University of Athens

* This essay is the outcome of research supervised by Assoc. Prof. Lina Papadopoulou, which has been co-financed by the Operational Program “Human Resources Development, Education and Lifelong Learning 2014-2020” (more specifically by the European Union, i.e. European Social Fund, and Greek national funds). This research is funded in the context of the project “The representation and the autonomy of Parliament: proposals for the enhancing of the role of Parliament” (MIS 5004478) under the call for proposals “Supporting researchers with emphasis on new researchers” (EDULLL 34).