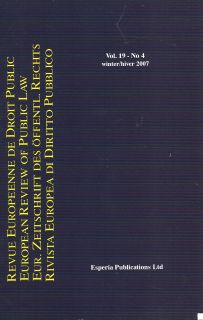 Freedom of Expression and the Administration of Justice in Germany

Freedom of Expression
and the Administration of Justice in Germany

Professor for Constitutional and Administrative Law, University of Hamburg (Germany), Faculty of Law

Freedom of expression is an essential human right and the basis of an open society and a strong democracy. In the German Constitution freedom of speech is an­chored in Art. 5 and in the rule-of-law principle of Art. 20. The latter article deals with freedom of speech and the media in the administration of justice. The judges are independent, do not take instructions from the executive, subject only to the Law. Court proceedings are in general open to the public, which is essential for democratic monitoring of the judiciary as the third power. Consequently, freedom of speech is vital for the administration of justice. The article deals with some fun­damental areas of court procedure. In the light of new litigation of the Federal Su­preme Court and the Federal Constitutional Court, issues of commenting on legal proceedings, criticism of judges and courts, expression in courts and namely ex­pression of judges are dealt with in detail. The tension between the right of the pub­lic to know and the right of the parties of the proceedings to be protected in their personal rights is depicted in the perspective of several cases. Under the bot­tom line, the German legal system can be regarded as rather liberal towards ex­pres­sions made on courts and their proceedings. The jurisdiction namely of the Federal Constitutional Court, safeguarding the guarantee of freedom of speech, ex­presses the idea of a constitutional presumption for the individual freedom (in dubio pro libertate).