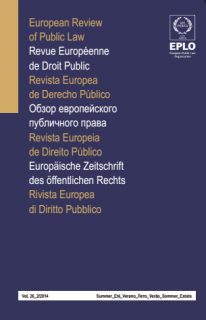 An international forum on constitutional and administrative law in Europe

SCOPE: The European Review of Public Law (ERPL) was established in 1989 to create an international forum for analysis and discussion of issues in the development of constitutional and administrative law in Europe.

The ERPL examines a wide range of issues that relate to the European Union, the European Convention on Human Rights, the national public law and practices, as well as to their mutual interaction and influence. In addition, the Review covers other jurisdictions that interplay with the European Public Law systems and/or offer relevant comparative insights.

To chronicle the evolution of national public law in the enlarged geopolitical area of Europe, the Review presents, in each issue, recent developments in the domestic legal order which are summarised and analysed by authorities in the field. Chronicled developments on the case-law of the Court of Justice of the European Union and of the European Court of Human Rights are also presented.

The ERPL devotes one issue of its quarterly publication to the conference of the European Group of Public Law (EGPL) which meets annually to discuss a particular public law issue of contemporary importance, with high-quality contributions providing a European as well as an international perspective. Recent conference topics have included: Internationalisation of Public Law; Citizenship in the European Union; Administration without Frontiers? European Migration Law; Concepts and Methods of Reasoning of the New Public Law; Public Law and the Judges; Public Law and the Economic Crisis.

AIMS: The ERPL seeks to publish innovative, original scholarship that makes a significant contribution to its subject matters. The Editors welcome articles from academics, practitioners and researchers including those among the younger generation, and book review articles dealing with significant new publications, particularly those regarding non-English language books. Short analyses of legislative and case-law developments within European institutions are also welcome for the on-line edition of the European Review of Public Law.

In order to attract scholarship of the highest standard, papers submitted by authors undergo rigorous peer review. The process of review normally takes between six to eight weeks.

The greatest part of manuscripts submitted to the ERPL is written in the English or French language. However, we remain committed to linguistic diversity and accept also submissions in Spanish, Russian, Portuguese, German and Italian.

Copyright in all pieces accepted for publication remains with the publisher, unless otherwise explicitly requested by the author. lf all or any part of an article/chronicle is reproduced elsewhere, the author should refer to its original place of publication, that is, the European Review of Public Law.

All rights reserved. No part of this publication may be reproduced in any form, by any electronic or mechanical means, including information storage and retrieval system without written permission from the publisher.