Skip to main content
You are hereHome » European Politeia 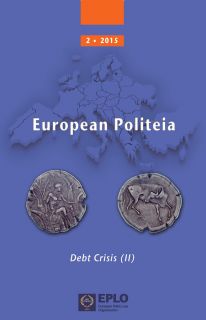 European Politeia is a bi-annual journal of European law, public affairs and society published by the European Public Law Organization under the scientific supervision of the Greek Center of European Studies and Research (EKEME) of the EPLO. The title of the journal highlights the protean relationship between individual freedom and the common interest; we are in permanent quest for a proper balance between the two. The term Politeia remains a signpost in a European vision with its many-faceted implications for a well structured political regime, the autonomy of citizens, and the bond which links the citizen to political society (Arist. NE Ethics 8.10.1, Pol. 4.4.3, Thuc. 2.37 and 6.104).

This is a European-Greek and Greek-European initiative. It is a Greek initiative but European in its outlook and concerns. The orientation of the journal is to offer a Greek perspective on the European project and European values. The Greek element is fundamental because Greece is on the geographical and symbolic frontier of Europe, at the origin of and the inspiration of European values, uniquely exposed, because of its peripheral location, to the pressures of the current crisis. The European aspect in this journal is embodied by, amongst other things, seeking contributions in widely spoken languages, English, French or German. Indeed anyone who reasons in the Greek language, or another language, should be expressing himself or herself for Europe. The need is constant to reframe elements previously identified as national or European without recreating frontiers among the European societies.

The aim of this publication is to provide an additional forum for the ongoing debates on a broad range of issues and particularly those that transcend individual countries. It will hopefully make relevant voices from the South of Europe more accessible to a broader audience. It will be a rewarding exercise to draw from the expertise of many scholars from Greece and other countries. The publication will be open to various theoretical and political perspectives that spring from different experiences and methodological traditions. We do not intend to narrow the frame of the debates.