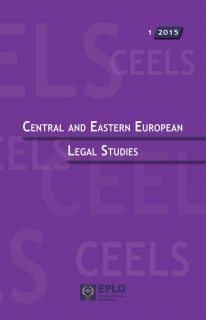 A structural change has been carried out with regard to this publication, which up to now had been a special edition of the European Review of Public Law.

With a view to reshaping this effort and to advancing even further its image and scientific input after the lapse of almost 15 years since the Central and Eastern European Legal Studies (CEELS) was launched, the Series has been reshaped first through the establishment of its own Board of Editors, composed by renown academics from countries of the Central and Eastern Europe as well as from Western European countries, all of them specialized in this area.

The aim is to give the opportunity to academics coming from CEE countries and also to academics from other countries specializing in this field, to come together and exchange views on public law issues of these countries.

This will be a publication appearing twice a year and in order to expand to a wide circle of readers articles will be accepted in English, French, Russian, German, Italian as well as in the native languages of authors coming from CEE countries (including the Turkish and Greek languages).

The Relationship between Financial and Judicial Accountability in the European Union

COVID-19, Legal Constraints, Questioning and Paradoxes within the EU: Some Reflections