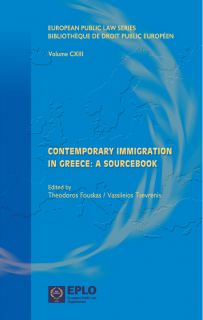 This book examines the immigration phenomenon which constitutes a major concern to modern societies like Greece. It is directly associated with a multitude of parameters affecting the reception societies, their institutions, and immigrants' distinctiveness and particularities. Greece has developed, from a once sending country of immigrants who moved in the first half of the 20th century to overseas countries and during the post-war period to Western European countries after the fall of their respective regimes, to a receiving country of immigrants. For the very first time, Greek society had to deal with immense immigrant flows from the neighbouring Balkan countries, the Republics of the former Soviet Union as well as considerable numbers of immigrants from African, Middle East and Asian countries. The book explores theoretical and empirical approaches, analyses the new policies and presents the latest researches in Greece, interrogating the relationship between immigration and immigration policy, institutional context of immigration and asylum management, work and employment, education, access to health care and social services, coexistence with the native population, formation of community associations and representation and judicial treatment and criminalization of immigrants. Each of its chapters, written by experts, explores how the conditions in the country, the policies, the politics, the values and attitudes influence the process of immigration and subsequently affect the immigrants, migration, and the nation as well. Contributors argue and suggest tangible solutions to imperative issues, explore current patterns and policies of immigration, while their contributions balance these and other conflicting concerns that require the substantive and expert discourse offered in this book. Focusing on the rational management of legal and illegal/irregular migration flows and the pursuit of justice and maintenance of security, coupled with respect for fundamental human rights, the volume is a practical handbook for researchers and students, government institutions or agencies and those involved in the phenomenon of immigration and immigration policy.

Dr. Theodoros Fouskas is a Lecturer at the Department of Hu¬manities and Social Sciences, New York College (NYC) in Athens, Greece. He specializes in immigration, immigrant labour and immi¬grant community organisations.

Dr. Vassileios Tsevrenis is a Lawyer in Athens, special scientific collaborator at Marangopoulos Foundation for Human Rights (MFHR), and member of the Scientific Committee of the Founda¬tion of Greek Parliament. He specializes in the protection of social rights with a focus on specific issues of immigration policies and social policies for the management of poverty.

3. NESTOR COURAKIS
Towards a Greek Immigration Policy with Humanity and an Effective Outcome

11. THEODOROS FOUSKAS
"Community" Found or Lost in the City? The Consequences of Precarious, Low-status Work on Association Participation of Nigerian Immigrant Workers in Greece

12. KATERINA VASSILIKOU
Children's Care and its Shortcomings in a Transnational Context

15. EVANGELIA KALERANTE
Economic Crisis and Economic Management of Education: Ideological and Political Consequences of its Predominance in Migrants' Education

16. CHRISTINE MILESSI
The Management of "Belong" to the School Community: Field Research of Albanian Pupils in the Civil Environment of Piraeus

17. STAMATIA PASCHALIORI
Human Rights and Volunteering: Their Role in the Decrease of Racist Behaviors in the Hellenic School

24. JOANNA TSIGANOU
Aspects of Racism and Xenophobia in Contemporary Greece

25. PANOS HATZIPROKOPIOU / VENETIA EVERGETI
Performing and Practicing Islam in the Orthodox City: Religious Space and Places of Worship of Muslim Migrants in the Athenian Urban Landscape

28. ZAINOUL ABEDIN
The Conditions of Bangladeshi Immigrants in Greece

30. THEODOROS FOUSKAS
Representation and Participation of Immigrants in Public Life: Immigrant Consultative Bodies at Local Level in Greece
PART VIII
JUDICIAL TREATMENT AND CRIMINALIZATION OF IMMIGRANTS
31. GEORGE P. NIKOLOPOULOS
The Changing Concepts of Frontiers and Territorialities in the "Area of Freedom, Security and Justice" and the Criminalization of Migration

34. CHARA KAFKA
Immigration as a Factor of Social Cohesion Catalysis: The Role of Law in its Preservation