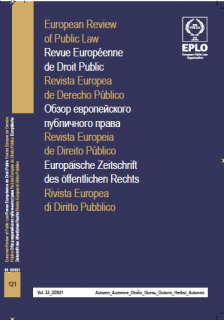 This ERPL issue starts by the second part of an article (the first part of which was published in ERPL, vol. 33, no 2, summer/été 2021 (120)), which aims to introduce International Environmental Law. The article maintains that irreparability or irreversibility is in the very essence of much environmental damage depending on the scope and extent of long-range adverse effects of human activity causing degradation and injury. States’ practice, judicial decisions, the pronouncements of international organizations allow the emergence of some basic principles governing International Environmental Law. It is generally accepted that States have a duty to prevent, reduce and control pollution and environmental degradation and a duty to cooperate in reducing environmental risks. As a consequence, the environmental damage to be caused will result in responsibility and liability of such States.

The second article of this ERPL issue examines current weaknesses in the role of the European Union as a global health actor in spite of the progressive strengthening of public health in it, and ex­plores potential reforms to enhance the promotion of public health in EU external relations. Proposals cover EU competences, the status of the Euro­­pean Union in international organizations and agreements, as well as the relationship between public health and general principles and objec­tives of the Union, the final objective being the establishment of a more com­prehensive EU public health constitutional framework.

The following article argues that, from a technical legal point of view, the decision of the withdrawal of Turkey from the international Istanbul Convention aiming to protect women against violence is substantially unlawful both in the procedural and the substantive sense. Many obeservers suffer to justify that withdrawal, which seems to be based more on political rather than rational reasons.

The fourth article studies and analyzes the sustained process of dismantling the Rule of Law and democracy in Venezuela, by politically controlling the Judiciary. Such process began in 1999, when a National Constituent Assembly convened without being established in the Constitution and decreed the intervention against the Judiciary and, in particular, against the Su­preme Tribunal of the country, which since then became politically con­trolled by Venezuela’s authoritarian regimes. Venezuelan political control over the Judiciary extended outside the borders when de­nouncing the American Convention on Human Rights, having a harmful projection on the Inter-American Judicial System for the protection of human rights.

In the section of Chronicles of Constitutional Law, the chronicle coming from Slovakia looks at the 2021 decision of the Constitu­tional Court on the constitutionality of the referendum on an early election and analyzes in its second part a series of Constitutional Court decisions on measures adopted by the government and the parliament to tackle the Covid-19 pandemic.

In the section of Chronicles of Administrative Law, the first one, coming from Belgium, is concerned with various interesting de­velopments in Belgian administrative law in 2020, which was again marked by the COVID-19 pandemic. This led to the adoption of a legislative act conferring exorbitant powers on the government by several legislators of the federal and federated entities, and to the disruption of the functioning of local authorities by the obligation of social distancing. At the peak of the health crisis, the time limits for bringing a claim to court and the time limits for court proceedings were extended before both civil and administrative courts, and a written procedure replacing pleadings was introduced. Jurisprudence was not left out, and important decisions were handed down by all the supreme courts.

The following chronicle on Portuguese Administrative Law provides an overview of the amendments introduced by Law 30/2021 to key pieces of legislation. It addresses the year’s 2021 amendments of (i) the Portu­guese Public Procurement Code, and (ii) the Portuguese Procedural Code of the Administrative Courts, and takes a look at the newly approved special public procurement measures that have been enacted in order to improve public procurement in areas that are crucial to Portugal’s economic recovery following the COVID-19 pandemic.

In the section of Jurisprudence, the chronicle gives an overview of the Portuguese Constitutional Court case law of 2020, when the Court issued an important deci­sion regarding the relationship between EU law and the Constitution of the Portuguese Republic. Besides this ruling, the Court faced relevant chal­lenges in different fields of the Portuguese legal framework, mainly Criminal and Tax Law. There was also a Ruling on powers of local authorities during the COVID-19 pandemic and another on adminis­trative and judicial control of the participation by minors in activities of a cultural, artistic or publicity/advertising nature.

The review of an interesting selection of books coming from Austria, Hungary, and Ukraine follows while this ERPL issue concludes with the presentation of books received by the EPLO Library.

M. Semih Gemalmaz, Introduction to International Environmental Law: From Initial Steps to Institution Building for the Conservation of the Environment - Part II [IN ENGLISH] (44 pp.)

U. Halatci Ulusoy / A. D. Ulusoy, Legal Criticism on the Withdrawal of Turkey from the Istanbul Convention for the Protection of Women against Violence [IN ENGLISH] (21 pp.)

A. R. Brewer-Carías, Dismantling the Rule of Law by Politically Controlling the Judiciary in Venezuela and its Harmful Projection on the Inter-American Judicial System for the Protection of Human Rights [IN ENGLISH] (42 pp.)

Introduction to International Environmental Law: From Initial Steps to Institution Building for the Conservation of the Environment - Part II

Dismantling the Rule of Law by Politically Controlling the Judiciary in Venezuela and its Harmful Projection on the Inter-American Judicial System...